PM accused of ‘hypocrisy’ over comments about domestic violence 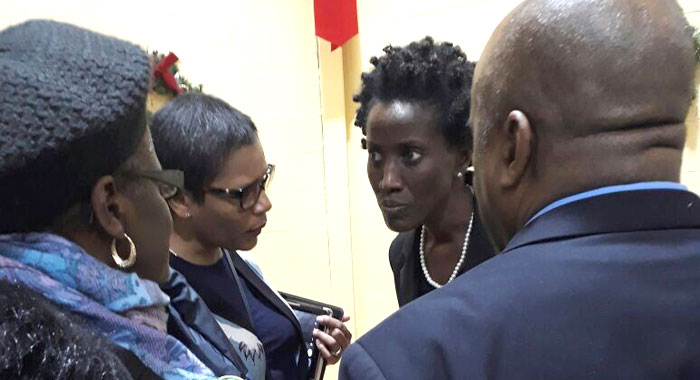 The opposition lead spokesperson on gender issues has accused Prime Minister Ralph Gonsalves of hypocrisy over a statement he made about the Vincentian diplomat who was recently recalled after punching his wife in New York.

Referring to the incident involving the diplomat Sehon Marshall — who has since resigned his post as Counsellor at the SVG Mission to the United Nations, Gonsalves said, “… if this incident had happened and there was no formal report to the police it would have been a matter between husband and wife.”

Addressing Vincentians at a town hall meeting in New York on Sunday, Barnwell, who is a senator for the main opposition New Democratic Party, said she was not raising the issue to make any political point but was doing so in the context of domestic violence and how the ruling Unity Labour Party in SVG “has not been taking the issue seriously”.

“I find the first statements by the Prime Minister particularly troubling not only because it carries the stench of high hypocrisy but also because it is strong indictment against the government for not recognising that encouraging women and children to report violence against them is still a challenge, and where women and children find the courage to report abuse getting them to court to advance prosecution is another huge challenge,” said Barnwell, who is also a lawyer.

On Nov. 24, police in New York responded to an early morning call from Marshall’s wife, Sandra Marshall, who is SVG’s Deputy Consul General to New York.

According to New York media reports, police met Mrs. Marshall with a split lip and a swollen finger, injuries she reportedly sustained after her husband punched her in the mouth.

Mr. Marshall could not have been arrested because of his diplomatic immunity and has since returned to St. Vincent and resigned his position.

Barnwell said she does not know why Gonsalves would have said that had no formal report been made to the police, the incident would have been a matter between husband and wife.

“… if you are strong against domestic violence — and this is not about a criminal aspect of prosecuting a man who is a father and all of that, it’s because we want to move to the state of zero tolerance.

“Zero tolerance is zero tolerance and sometimes we have to take really difficult hard choices and decisions against those whom we hold close and whom we love,” Barnwell said.

Barnwell said that reporting enables a woman to get a restraining order, allows a woman, child or dependant to get an occupation order, and also enables applicants to get maintenance through the court for herself and her children.

The senator said this is important because most women do not leave abusive homes because they have no money and nowhere to go.

She said that while the latest iteration of the domestic violence legislation in SVG is stronger, if a strong piece of legislation is not going to be enforced, it makes no sense.

“If you are not going to train police officers to have a deep respect for women when they come to the police station and to take their report as you are mandated to do and to investigate that matter rather than wait two and three weeks before you can actually go out and find out what is happening, then nothing is happening. Why do you have an act?” Barnwell said.