Former journalist admitted to the Bar 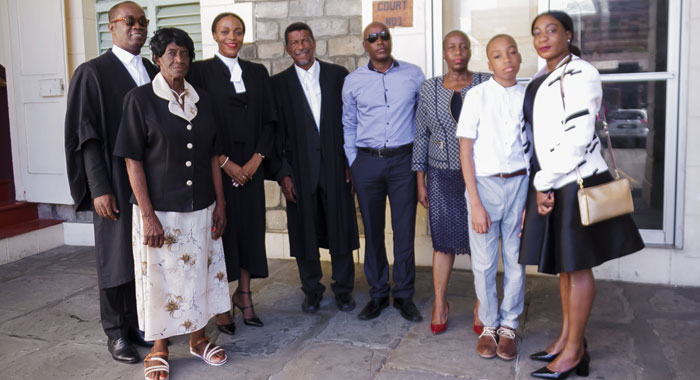 Barbadian/Vincentian Alicia Dells, a former journalist, was admitted to practise as a barrister-at-law and solicitor in St. Vincent and the Grenadines on Tuesday.

Dells, who is already a member of the Barbados Bar Association (BBA), was admitted to practise law in Barbados in October 2014.

She was introduced to the Vincentian bar by lawyer Cecil Blazer Williams and seconded by Julian Jack.

She was born in Barbados to a Vincentian mother and grew up in St. Vincent, where she pursued her primary education at the Stubbs Government School, her secondary at the Girls’ High School and then went on to the St. Vincent Community College. She later moved back to Barbados to pursue her university education and continues to reside there.

Dells obtained an honours law degree from the University of the West Indies Cave Hill campus in Barbados and her legal education certificate from the Hugh Wooding Law School in Trinidad and Tobago.

The young attorney’s application to be admitted to the local bar was heard before Justice Esco Henry.

In delivering her response, Dells acknowledged God, her family, the local attorneys who facilitated her call, her friend counsel, Ranelle Roberts-Williams, and other friends who offered their support and encouragement during her time of study and thereafter.

She especially thanked her mother, Paula Dells, her grandmother, Rita Dells, her uncle, Collie Dells and her aunt Necla Dells, who were all present at the hearing.

She noted that she was only able to make it thus far through the various sacrifices made by her mother, saying, “I am grateful for my mother, who sacrificed her story so that my story could be told.”

Dells promised to uphold the standards of the legal profession and noted that she will continue to practise law with honesty and integrity while being mindful of her duty to give back to her community, saying, “To whom much is given, much is expected”.

She also shared her experience as an attorney in Barbados where she currently practises in chambers as a general practitioner.

She has a keen interest in human rights and social justice and since 2014 has been an executive member of the SAVE Foundation, a leading non-profit in Barbados which spreads awareness and advocates on behalf of victims of domestic abuse.

One reply on “Former journalist admitted to the Bar”