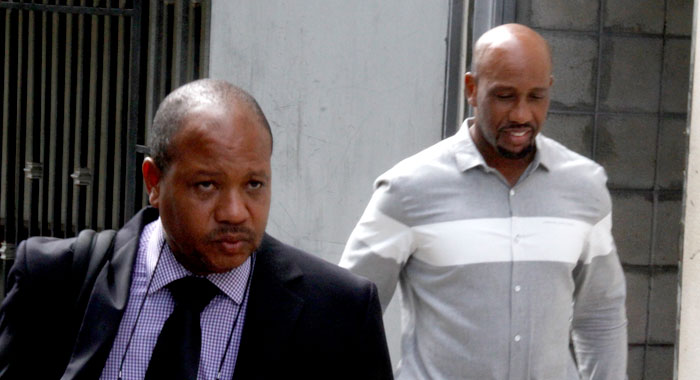 The accused, Robert Steele, right, and his lawyer, Richard Williams leaves the court after he was discharged on Friday. (iWN photo)

The case in which a U.S.-based Vincentian man was charged with possession of a round of ammunition at the Argyle International Airport fell in shambles on Friday, after testimony that left raised some embarrassing questions about policing in St. Vincent and the Grenadines.

The case also highlighted a challenge that security at AIA might face in proving a case against an accused person when x-ray images reveal an illegal item that a human being has difficulty finding in a suitcase.

The aviation security personnel can search the bag in the presence of the passengers, but the passenger is not allowed into the x-ray room.

In the case, in which Robert Steele, of Villa and the United States, was being tried on a charge that he had in his possession a round of 9 mm ammunition at AIA without a licence on Dec. 27, one of the witnesses, an aviation security officer, did not find on the bullet the initials he said they had placed there two days earlier, when the bullet was reportedly found in Steele’s suitcase.

Another witness, a police officer, said the bullet that was presented as evidence in court only had one letter of his initials, rather than the two he said he placed on it on Wednesday.

One person with knowledge of the investigation suggested that the round had been touched so many times by so many persons that the ink had been inadvertently erased from the piece of tape that police had wrapped around the bullet when it was allegedly collected as evidence.

On Friday, day two of the trial, defence counsel Richard Williams wasted no time in making a no-case submission after the crown closed its case following the evidence of seven witnesses, including a weapons and ammunition expert.

Williams presented three grounds for his no-case submission, the first being that the prosecution had not presented any evidence that the defendant does not have a licence to hold ammunition in SVG.

The lawyer further argued that the prosecution had not proven that the round of ammunition presented to the court was the same one that was allegedly retrieved from the defendant’s suitcase.

He noted that Romario Woodley, an aviation security supervisor at AIA, who had allegedly retrieved the round of 9mm ammunition from Steele’s suitcase, had told the court that after retrieving the round, he handed it over to a plain clothes officer who then handed it over to his uniformed colleague.

Williams argued that this led to a break in the change of custody of the exhibit.

He further told the court that Woodley’s initials are not on the round of ammunition presented as evidence in court on Friday.

The lawyer further noted that Police Constable Ollivierre, who said that he had initialled the round of ammunition allegedly retrieved from Steele’s suitcase, couldn’t show the court his initials on the round presented as evidence.

Ollivierre also did not tell the court who had given him the round of ammunition, but only said it was handed over to him and he initialled it, Williams said.

The defence counsel said that these points were enough for a no-case submission to be upheld.

He, however, told the court that, for completion, after the bag was reportedly opened and the source of the suspicious image was not found during a physical search in Steele’s presence, the aviation security person took the opened bag to the x-ray machine and scanned it in the presence of five persons, but not Steele.

“M’Lady, you cannot take that bag from Mr. Steele’s possession, take it away from him, carry it into another room with five of you, two persons who are unrelated to this particular criminal matter, rescan that bag in his absence, bring that bag back to him, and all this time, M’Lady, this bag is opened. It would have even been bad had they sealed back that suitcase and taken it back and brought it back sealed. They went with the bag opened out of Mr. Steele’s presence. M’Lady, that is not proper.”

He said the only alternatives are to conduct another physical search of the bag in Steele’s presence or accompany the security officials to the scanning room.

“God knows, if Mr. Steele who was down here on his sojourn — I mean I am just thinking things on the ridiculous — he may have been friend with a lady of one of those officers in that room. They may have something against him. We don’t know,” Williams said.

Senior Prosecutor Adolphus Delplesche, who had led the Crown’s case commented that the defence counsel was pushing things “beyond the boundary”.

“Mr Steele may not know who he may have spoken to during his time in St. Vincent. He is not a bad looking fella,” Williams further said.

“Yo’ watching him?” Delplesche joked in his usual jovial manner, causing the court to break out in muffled laughter.

The lawyer continued: “So M’Lady, that breach of protocol alone in taking this opened bag away from Mr. Steele’s possession is sufficient enough to discharge Mr. Steele.”

He said that even from a more practical standpoint, “Carrying back one round of 9mm bullet to America? Mr. Steele lives in Georgia, a gun state. It’s like checking somebody coming from New York into St. Vincent for coke. That doh make no sense,” he said and asked that the case be dismissed.

Delplesche did not object to the no-case submission, but pointed out that section 41 of the Firearms Act says that the burden of proof that one is a holder of firearms licence lies with the defendant.

“Your Honour, when Romario Woodley can’t identify what he find, it’s public interest, I don’t see why I should object [to the no-case submission],” Delplesche said.

The Crown’s case was that Zel Charles, an aviation security supervisor at AIA, was looking at x-ray images of bags moving along a conveyor belt at AIA about 5:20 a.m. on Wednesday.

Charles, who has been an aviation security officer for 14 years, said she saw in the bag an image of what appeared to be a round of ammunition.

She therefore asked Romario Woodley, a junior aviation security officer who has been in the post for nine months, to pull the bag from the conveyor belt and record the information from the baggage tag in the flagged-bags logbook, in keeping with the standard practice.

The aviation security supervisor told the court that the name on the bag was “Robert Steele”, scheduled to travel on LIAT 304.

She said she called the LIAT agent, in keeping with the protocols, and asked the agent to contact Steele.

Charles said that about the same time, Richard Burke, also an aviation security supervisor, came into the room and they reviewed the image together.

A police officer approached Steele, who was sitting in the departure area and took him to the check baggage room, where a physical search of the bag did not turn up the suspicious images.

The bag was taken to the x-ray room and was scanned in the presence of five persons, but Steele was not allowed to go into the room because the airport’s policy prohibits passengers from entering that room.

The second scan also revealed the image, and since the bag was scanned open, an aviation security official was better able to pinpoint the location of the object and found a round of 9mm ammunition inside Steele’s bag in the pocket of a pair of white jeans.

Steele denied knowledge of the round of ammunition.