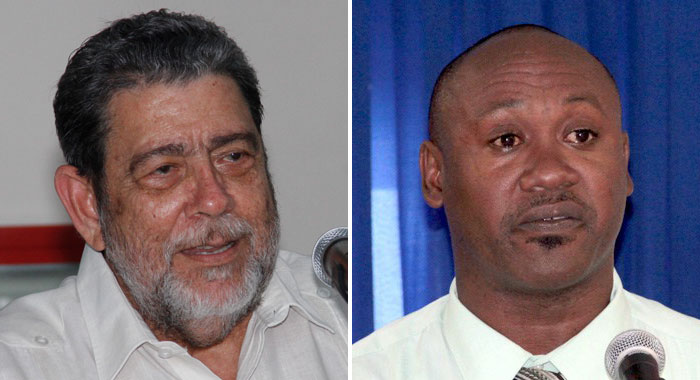 Prime Minister and Minister of National Security Ralph Gonsalves and head of the Police Welfare Association, Sergeant Brenton Smith, crossed swords last month, December 2017, over comments made by Smith, earlier in the year, that he and his group would “storm” the office of the Prime Minister to seek redress of matters affecting the constabulary.

Gonsalves brought up the issue during the discussion on a debate on pension reform during the annual budget consultations with public sector unions, which was chaired by the new Minister of Finance, Camillo Gonsalves.

In the closed-door meeting, a record of which was obtained by iWitness News, the prime minister had outlined his government’s view on pensions reform, stating that the current arrangement in which public servants get a pension from the central government and another from the National Insurance Services is unsustainable.

In response to the prime minister’s presentation, head of the Public Service Union, Elroy Boucher, said that the prime minister has suggested that his government is prepared for a battle for public opinion over the issue.

Gonsalves had earlier suggested that there could be a class war over pension.

Boucher, in rephrasing his response, said,  “But I am saying we do not envision a conflict when it comes to pension reform.”

“I prefer when we talk like that,” the prime minister said.

“Men wanted to come here to storm me,” he adding triggering raucous laughter at the meeting which was also attended by Smith and other members of his executive.

“But the men are here already,” Boucher said to more laughter, adding, “So they have actually stormed you. It shows you how innocent that is, eh?”

“What I said publicly is this: I have men around me whose duty it is to protect my person and anybody who comes, policeman or otherwise, who want to storm would have to get past those first. And if they believe that because they name police they could storm me and get past those who around me, they have another guess coming.”

At this point, Smith, joined the conversation, saying, “Sir, we can’t use things for political expediency, you know. It can’t be so. Because I am confident that the Police Welfare Association, which I am head of, has an obligation to protect every single soul in St. Vincent and the Grenadines, including the Prime Minister. And some of us are probably even more loyal than some of the persons who are being mentioned here today. More loyal.”

Gonsalves, responded, “Who are being mentioned here today?

“Smithy let me tell you something. I don’t want this conversation to deteriorate.”

“I didn’t bring it up,” Smith responded.

“I don’t want this conversation to deteriorate, but I tell you something, you were entirely rude and out of order to talk that you would storm the office of the prime minister,” Gonsalves said.

“Rude and out of order. So that you can say what you want to say. I am telling you this. All I am saying is that who coming here to storm, I have people here to protect me.”

Smith said that the Welfare Association would have to be “crazy people to know of your protection and come to storm in any violent way.”

Gonsalves told Smith that there are a lot of crazy people around.

Gonsalves, however, told Smith that he is not going to be engaged in any discussion in relation to the “storm”.

“I am not bringing myself to that today,” the prime minister said.

“I didn’t bring it up,” Smith responded.

“And I raised it in a particular context,” the prime minister said.

Smith told Gonsalves that he has respected him over the years and will always do so.

“I am giving you my opinion. I don’t have to detail it here,” Gonsalves said, adding, “You may disagree with me.”

Gonsalves said, “What I know is this, you say you want to come and storm the office of the prime minister. That is wha’ you said, you know.”

Gonsalves, however, told Smith that he credits him “with more intelligence than to jostle with me with that kind of rubbish.”

Smith and Constable Kenroy Martin, another member of his executive, have been brought up on internal disciplinary proceedings over the comments.

The comments were made in a WhatsApp group comprised of members of the executive of the Police Welfare Association.

The recording was leaked and later became public.

The internal disciplinary proceedings were instituted against Smith and Martin after prosecutors decided that the allegations contained nothing to substantiate a criminal charge against the men.

In his end of year address to the association, Smith called on members never to be “as selfish as the snitch in the executive” who leaked the recording.

Gonsalves also mentioned the storm comment at the annual Police Awards Ceremony last week Thursday, Dec. 28, 2017, joking that his lateness in arriving at the event was not because anyone had stormed him.