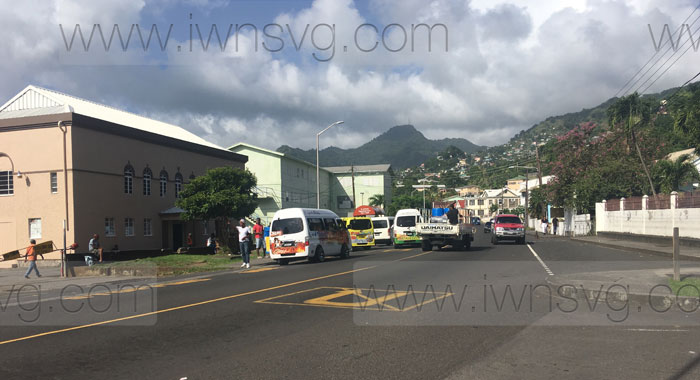 “No U-turn” signs near the Peace Memorial Hall in KIngstown have practically eliminated accidents in the area. (iWN photo)

The ‘no U-turn’ signs that police have painted on the streets outside the Peace Memorial Hall have practically eliminated accidents in the area, the Traffic Department says.

Head of the Traffic Department, Superintendent of Police Kenneth John said that police statistics had showed that there was an accident in the area almost every day.

“So we went back to our drawing board and we thought of signs that can fit that area,” John said, adding that his department settled on no U-turn signs.

He said police have also restricted entry into the Frenches area for omnibuses Monday to Friday 3:30 p.m. and 6:30 p.m.

“Since then, we have not had an accident there since we placed those signs. So I can say those signs are a plus,” John told iWitness News on Dec. 28, 2017.

He, however, said that a few minibus drivers disobey the signs whenever a police officer is not there.

Therefore, the Traffic Department has decided to place a plainclothes officer there and have caught a lot of persons breaking the rules.

He said the police operating in the area are under a strict no-violation policy.

John says the traffic laws will be soon be revised since the Cabinet has formed a committee, of which he is a member.

“I know I will have a great input in the traffic laws. I know the culture. I’ve been working at Traffic for over 30 years. I have 34 years in the police force and all my years are at Traffic, so I know the culture of our drivers, I know the Traffic Act inside out,” the senior police officer told iWitness News.