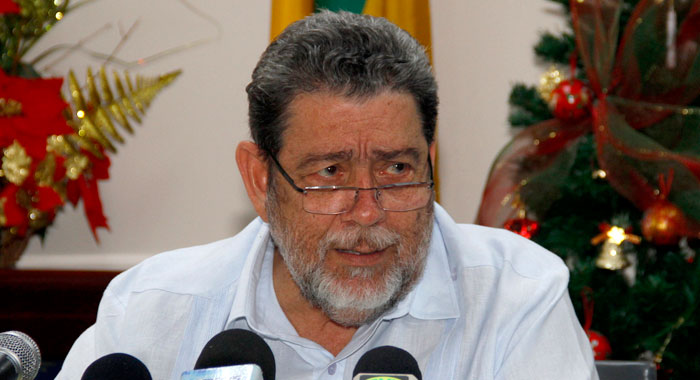 Prime Minister Ralph Gonsalves wants the Trinidad and Tobago government to disclose and account for the money it makes from the Caribbean Air Navigation and Advisory Services (CANAS).

“You can’t be using the Piarco flight information region as though it only belongs to you,” he told a press conference in Kingstown on Tuesday, Jan. 2, 2018, adding that this is a matter that he has been trying to get the Keith Rowley administration, as well as its two most recent predecessors in Port of Spain to address.

The prime minister said that CANAS manages the Piarco Flight Information Region, which stretches from St. Kitts to Trinidad and Tobago, and includes the French Departments of Martinique and Guadeloupe.

“In the old days, the old colonial days, a private company used to run the PIARCO Flight Information Region,” Gonsalves said, adding that after the Eric Williams’ government and some years of nationalism, the Trinidadian authorities took over management of the entity.

“The planes which pass over in our airspace in the OECS (Organisation of Eastern Caribbean States), in Barbados, we should get money for that, because it is our property. But we are not represented on CANAS board and I am calling for representation for ourselves and Barbados and the OECS countries and Barbados support me on this,” Gonsalves said.

Gonsalves said he spoke with Prime Minister of Barbados Freundel Stuart recently on it because he has to remind everyone about the matter and has to line it up properly.

“We want representation as to how we deal with our property, secondly, I want transparency. I want to know how much money is being collected and how much it is costing to manage the Piarco Flight Information Region. You can’t be running it by yourself, not telling me how much you making, all you telling me, well it costs money to run it.

“I say, ‘Well, Ok. If the expenses to run it are more than the revenue, I would like to pay to the expenses; I don’t want a free ride. But you can rest assured that if they weren’t making a good dollar off of it, I woulda hear long time about how we have to contribute.”

Gonsalves said CANAS gives training to civil aviation authorities or directorates of airports, and donate computers and so on to the various jurisdictions.

“I would prefer not to get those things, tell me how much money that I am supposed to get and then I will tell you how I would like my money to be spent. I don’t think that this is such an unreasonable position to take,” he said.

The prime minister said he has asked CARICOM Secretary General, Irwin LaRocque to put the matter on the agenda for the CARICOM intercessional meeting in Haiti next month.

Gonsalves, however, reaffirmed that Kingstown has “excellent relations” with Port of Spain and every other CARICOM capital.

“And we are not in this thing for mashing up CARICOM or create confusion or anything. What we are talking about is for us to solve these kinds of difficulties. And CARICOM itself would be undermined if it is unequally yoked…

“Keith [Rowley] is my good friend, Trinidad is a country of great importance to us as we are to them. We work closely, we have a good relationship, but even among friends, when we have difficulties, we have to talk about them and resolve them,” Gonsalves said.