Man fined for weed in hollowed out yam 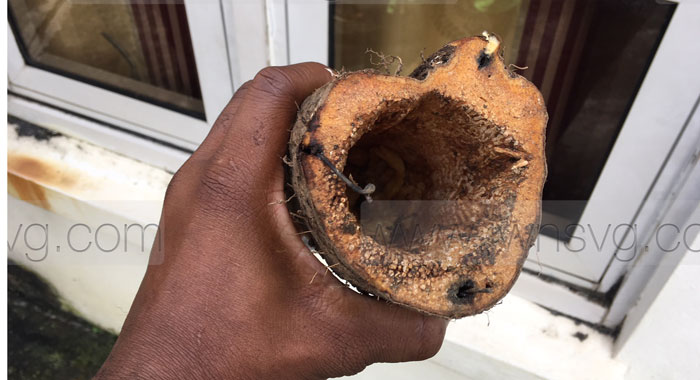 One of the hollowed out yam, in which Saville Keir of Fitz Hughes was attempting to send the marijuana to the Grenadines. (iWN photo)

A man nabbed with over a pound of marijuana stuffed into five hollowed out yams, told the Kingstown Magistrate’s Court on Friday that he had taken the action to help to provide for his child.

The man, Saville Keir, of Fitz Hughes, pleaded guilty to a charge that on Jan. 4, 2018 at the Grenadines Wharf in Kingstown, he had in his possession 522 grammes (1.15lbs) of cannabis with intent to supply to another.

He was conducting security checks at Gate 7. While there, he saw a cart man pushing a cart and the defendant walking along with him.

The cart contained a white sack and when they approached the gate, Nicholls approached the person pushing the cart and asked about the ownership of the sack.

The cart man said it was the defendant’s. The constable approached the defendant, identified himself and requested a search of his person and sack.

Nothing illegal was found on Keir’s person, but the police officer saw some yams in the sack.

The constable took out the yams and noticed that five of them had been hollowed out and packages stuffed inside.

He checked the packages in the presence of the defendant and one PC Lewis and found them to contain plant-like material resembling cannabis.

Keir was arrested and charged.

When asked what he had to say for himself, the defendant told Magistrate Bertie Pompey, that he has a 7-year-old daughter and has nothing to give to her and peddling the weed was the only thing he could have thought of.

He asked the magistrate to impose a fine and give him some time to pay.

Keir was fined EC$500 to be paid in one month or, in default, six months imprisonment.

But lawyer Grant Connell, who in the court at the time, asked the magistrate to give the man a little longer to pay the fine.

“If you give him a little longer, he might be able to get a job with the medical marijuana people when they come, to help pay the fine,” Connell said to some giggling.

He was apparently referring to the medical marijuana investors that Prime Minister Ralph Gonsalves had spoken about at a press conference earlier.

“A little longer. One month? He can’t make that, your honour,” said Connell, an advocate for making possession of small quantities of marijuana a ticketable offence.

The magistrate then decided to give the man two months to pay the fine.

2 replies on “Man fined for weed in hollowed out yam”