Doctor said Yugge wouldn’t have been in court – mom (+Video) 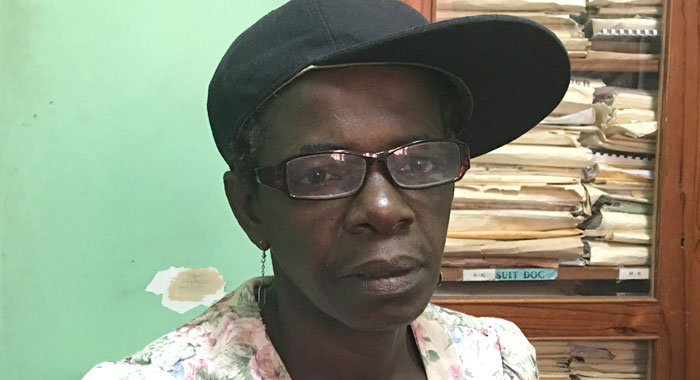 Gailene Farrell, mother of former model, Yugge Farrell, who has been the subject of much public discussion since Jan. 5. (iWN photo)

The mother of embattled model Yugge Farrell says that she was not in court on Monday during her daughter second appearance there because a doctor told her that the model was unfit to be taken to court.

“Dr. Providence told me Saturday — she phoned us tell us come down Out Patient [Clinic]. She tell us, “Miss Farrell, Yugge wouldn’t be coming in court on Monday because Yugge ain’t fit to come court.”

Farrell re-appeared in court on Monday, after completing two weeks of psychiatric evaluation ordered by then Kingstown Magistrate, Bertie Pompey.

The court order came in response to an application by the prosecution after Yugge had pleaded guilty on Jan. 4 to a charge that she used abusive language, to wit, “you dirty b***h” to Karen Duncan-Gonsalves, wife of Minister of Finance, Camillo Gonsalves, who is son of Prime Minister Ralph Gonsalves.

Yugge has alleged that she was in a relationship with Camillo, which ended in 2016.

Some persons who turned up to court on Monday were surprised that Yugge’s mother was not there.

(Scroll for the video of the full interview with Gailene Farrell)

However, the woman told iWitness News on Tuesday that when she received the call from Dr. Providence, who she said is her cousin, she told the physician that she too had seen “unusual movements” when she visited Yugge at the Mental Health Centre on Friday.

“So she tell me tell me family and friends that Yugge ain’t coming in to court,” the woman said, adding that she now feels as if she was set up,

“Because I done tell everybody. I dey [was] in town yesterday [Monday] and me ain’t know Yugge in court.”

The woman said she was sorry that she was not in court, but also said, “Is God do everything why I ain’t been there.

“Me can’t understand how they just ha’ the girl just tugging she here, nobody ain’t telling me nothing, nobody ain’t coming and asking me. Whappen? Yugge ain’t ha’ no mother then? I is Yugge mom and I think De Comrade shudda treat me better,” said the woman who also told iWitness News that she had discussed with Prime Minister Ralph Gonsalves last year the relationship that Yugge and Camillo allegedly had.

Gailene told iWitness News that when she visited Yugge at the Mental Health Centre on Friday, she noticed that her daughter was “moving unusual”.

“So I say, I wonder if is the medication they giving Yugge now why she moving so,” the mother told iWitness News.

She said she had taken Omega 3 and a herbal medication for Farrell and the staff at the psychiatric hospital gave them back to her.

“So me wah know how them could tek them nice healthy tablets that we buy and dey gi’ me them back to carry home.”

The mother said she asked a nurse what complaints her daughter had and the nurse said that she was not sleeping well.

Gailene said she asked Yugge what medicine they had given to her and they said a sleeping pill and she took it.

“I said, ‘But you know you shouldn’t tek it,” the mother said, adding that on further questioning, Yugge said that they had also given her two other pills.

“I notice like from since she took them pills dey, she changed.”

Speaking to reporters outside the court on Monday, lawyer, activist and opposition politician, Kay Bacchus-Baptiste said that Gailene had come to see her in tears last week asking for her help.

Bacchus-Baptiste had inquired outside the court of Yugge’s older sister, who did not give her name to reporters, about their mother’s whereabouts.

The woman said she did not know.

“That’s odd. Because the mother came to visit me,” Bacchus-Baptiste said.

She said Gailene had told her that she had taken pizza to Yugge at her request on Thursday.

On Friday, when Gailene visited, Yugge told her that she was looking forward to being released, Bacchus-Baptiste told reporters outside the court.

“What has happened since then and why is the mother not here this morning? Something has happened,” she said adding that Gailene was in tears at her office.

“Something is amiss,” the lawyer further said.

Yugge’s lawyer, Grant Connell, who had argued strongly in court on Jan. 5 against her hospitalisation at the Mental Health Centre, told the court on Monday that, against his advice, she was given antipsychotic drugs at the health care facility.

The section of the law under which Yugge was sent for psychiatric evaluation does not speak to treatment.

On Monday, Senior Magistrate Rickie Burnett, who is now presiding over the matter ordered that Yugge be taken back to the Mental Health Centre for an additional week while he considers the legal argument presented by the prosecution and defence.

The court has been presented with a report that says that Farrell is unfit to stand trial and Director of Prosecution Colin Williams has argued that she be ordered to remain at the Mental Health Centre for further treatment.