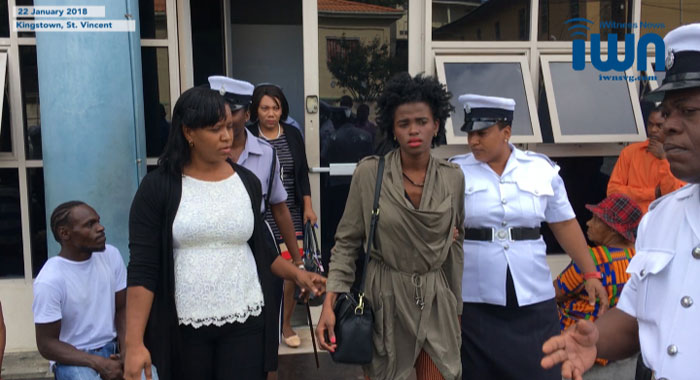 Former model, Yugge Farrel, is escorted from the Kingstown Magistrate Court for transportation to the Mental Health Centre on Monday. (iWN image)

The medical report that the psychiatric hospital prepared on embattled model Yugge Farrell was sent via WhatsApp on the weekend.

Farrell’s lawyer, Grant Connell, disclosed this to Senior Magistrate Rickie Burnett at the Kingstown Magistrate’s Court on Monday, at the end of Farrell’s court-ordered evaluation.

The defence lawyer said he had been presented in court with a hard copy of the report on his client, but said that that was not the first time that he was seeing the document.

“Over the weekend, I was able to get a view of a copy of it. My friend (Director of Public Prosecution Colin Williams) was kind enough to disclose although it was not that easy to read because it was on WhatsApp,” Connell said.

“And when I printed it, it was a bit distorted. But, from printing it out, I noticed that it was addressed to the magistrate. It wasn’t carbon copied to the defence or, in fact, the DPP, but I was able to look at it and saw a few things from it,” Connell told the court.

It was not clear how or why the document, which was addressed to the magistrate was sent to the prosecutor.

Farrell was, on Jan. 5, sent to the Mental Health Centre for evaluation after pleading to a charge that on the previous day, she used abusive language, to wit, “you dirty b***h” to Karen Duncan-Gonsalves, wife of Minister of Finance, Camillo Gonsalves.

She pleaded not guilty to the charge and the prosecution then asked that she be sent to the mental health Centre for a psychiatric evaluation.

Then presiding magistrate, Bertie Pompey, granted the application, which had no supporting evidence or argument and which Connell strongly opposed.

The psychiatric report presented to the court on Jan. 22 said that Farrell was unfit for trial.

The DPP asked the court to send the woman back to the psychiatric hospital for further treatment.

However, Connell opposed the application, saying that his client should be granted bail.

Burnett said he needed some time to make his decision and ordered that Farrell be sent back to the Mental Health Centre until next Monday, Jan. 29, when he expected to give his ruling.

One reply on “Yugge’s psychiatric report sent via WhatsApp”