In latest defence of his son, PM cites Christ’s silence 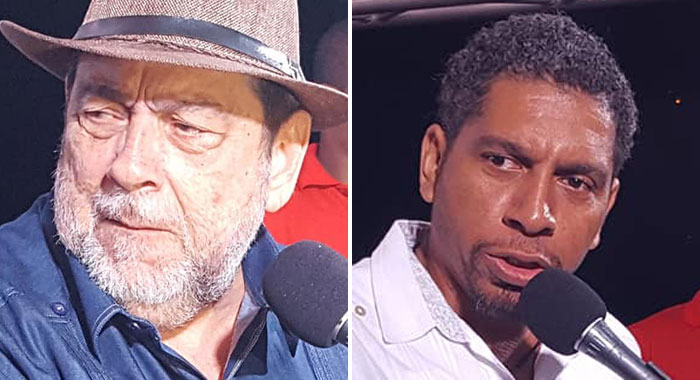 In his latest defence of his son, Camillo Gonsalves, who is the focus of a sex scandal, Prime Minister Ralph Gonsalves on Saturday cited the silence of Jesus Christ during his trial before the high priests.

The younger Gonsalves is yet to break his silence amidst an allegation that surfaced on Jan. 6 that he had a years long extra marital relationship with Yugge Farrell, a 23-year-odl former model half his age.

The prime minister has advised his son, who is also Minister of Finance, to maintain “a dignified silence”, even as the older Gonsalves has repeatedly commented on the saga.

On Saturday, the prime minister said he was reading Matthew 27: 12-14 two weeks ago and when he was preparing for Parliament.

“When Christ was taken before the high priest and the elders and Pilate, the Roman governor was there. When they were preparing to take him for crucifixion, I want to read what was said and I want to make a point.

“‘And when he was accused of the chief priests and elders, he answered nothing. Then said Pilate unto him, Hearest thou not how many things they witness against thee? And he answered him to never a word; insomuch that the governor marvelled greatly.’

“And when I say to maintain a dignified silence, they want to cuss me. But, you know, 10 centuries before the birth of Christ, the wise man Solomon said a number of things. They weren’t recorded 10 centuries before. They were recorded sometime between the years 715 before Christ and 686 before Christ. And this is what was said: ‘The lip of truth shall be established for ever; but a lying tongue is but for a moment’,” Gonsalves said.

“‘The lip of truth shall be established for ever; but a lying tongue is but for a moment’,” Gonsalves said repeated, quoting Proverbs 12:19.

“And, I follow the wise advice in the book of Ecclesiastes. ‘To every thing there is a season, and a time to every purpose under the heaven: … a time to sow; a time to keep silence, and a time to speak’. Yo’ hear me? So who wah kick up, kick up.”

The saga with Farrell unfolded when she was taken before magistrate Bertie Pompey charged that on Jan. 4 in Kingstown, she used abusive language to Camillo’s wife, Karen Duncan-Gonsalves, calling her a “dirty bitch”.

Farrell was sent for two weeks of psychiatric evaluation, without the prosecution giving the court any reasons to support its application.

Three weeks after her arraignment, Farrell was granted EC$1,000 bail with one surety and is slated to return to court on Dec. 17.

16 replies on “In latest defence of his son, PM cites Christ’s silence”