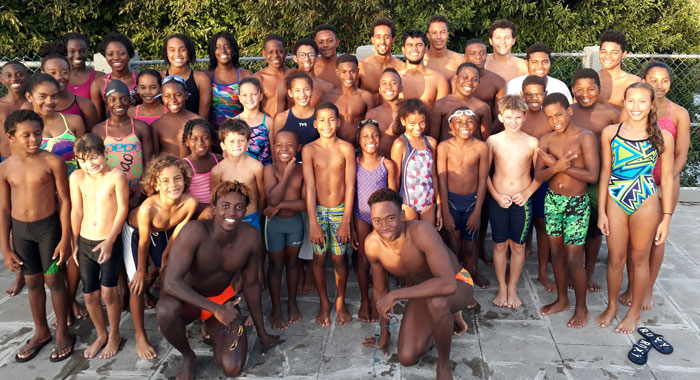 This event was the first opportunity the BSSS swimmers have had to compete in 2018 and the club said that its swimmers showed that hard work pays off.

National records were also broken at the meet.

Alex Joachim, one of St. Vincent and the Grenadines’ most decorated swimmers, put his name in the record books once again, breaking the 200 metre breaststroke and freestyle record and also the 100 metre butterfly record in the boys 13-14 year age category.

For the boys, Brandon George won 9 to 10 years category. Eleven to 12 years champion was Eltonte Leonard. Alex Joachim took the title in the 13 to 14 years age group and Shane Cadogan finished the event as overall champion in the 15 years and above.

With such a good combined effort from all BSSS swimmers, the club ended the three-day competition proudly winning top overall club for the competition.

BSSS Founder and Head Coach, Kyle Dougan expressed delight at the results of all the BSSS swimmers that took part in the event.

“It is always a pleasure to witness the great improvements of my swimmers. These are very satisfying results that come 6 weeks after BSSS first started the IMPACT 21st Century Swim Training Program which the Club is pioneering in collaboration with British swim coach, Tony McGuinness. 2018 looks to be a very exciting year for swimming in St. Vincent and the Grenadines,” he said.