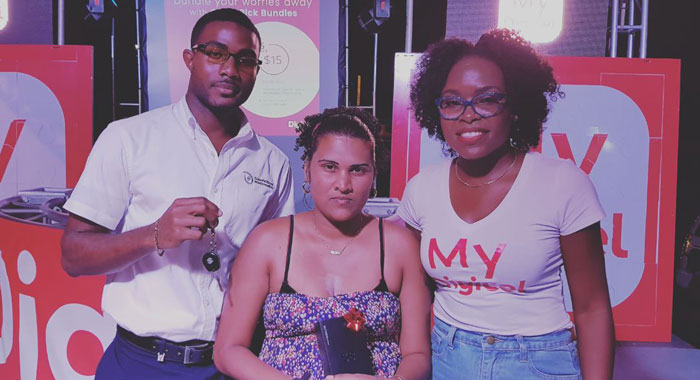 Anthony George of Richland Park has won the Suzuki Swift car that was up for grabs in the My Digicel Tuesday Suzuki Swift promotion.

It was an evening of exciting and great wins for persons at Heritage Square on Friday when the telecommunication and entertainment provider brought the curtains down on the promotion.

Friday’s activity, which took the form of a draw, saw the finalists assembling two eight-foot-tall puzzles and battling out in a quiz, which generated quite a stir.

The finalists were Kerisha Bullock, who represented her brother Kerry Bullock of Calder.

Bullock became qualified for the finals after texting CAR the most to 1131.

George was the other finalist and qualified on the spot to participate after being the first person to text the year and month Digicel commenced operations in St. Vincent and the Grenadines.

At the end of competition, George, who amassed 1,000 points, emerged winner and drove away with the free Suzuki Swift with six months’ license and insurance for an entire year paid, after he amass

Bullock did not walk away empty-handed and was rewarded with a brand new Samsung Galaxy S8.

George said: “Since back in August 2017 when the competition launched,   my wife and I religiously opened the My Digicel app when prompted by the texts for our chance to win. We frequently reminded each other that it was Tuesday to open the App. We also won umbrellas and discounts off our postpaid bill from using the My Digicel App.

“Leading up to the draw, my wife became extremely anxious. She frequently showed me pictures of other Suzuki Swift with rims and other customisations she would like.”

George said that Valentine’s Day, his wife made a lot of confident jokes about what would happen if she won the car.

“To my surprise, my wife called on Feb. 15 saying she won a trip for 2 to Young Island compliments Digicel. In my mind I thought she was still joking. It’s not until I saw the gift voucher that I began to take this Digicel promotion very seriously.”

The grand prizewinner further stated, “I got the feeling that questions concerning the App and Digicel would be asked, so my wife and I both pulled up the Digicel Website and did our research. When Candy Man told everyone to take out their phones, I instantly became excited.”

Meanwhile, Digicel’s Marketing Executive Jamisha Wright congratulated all the winners, including Daryl Wilson, a member of the audience who won himself a brand new Samsung Galaxy S8 for activating a Quick Pick 5 day bundle on the spot. Wright told the audience to lookout for something grand in the coming months, and encouraged persons to continue using the very convenient My Digicel app to enjoy exclusive deals. The Marketing Executive ended by thanking Sentry Insurance for offering an additional 6 months free insurance coverage to the winner.

Friday’s draw was supervised by Jamal Bushay and Kizzurn Grant, auditors from the auditing firm, KPMG.