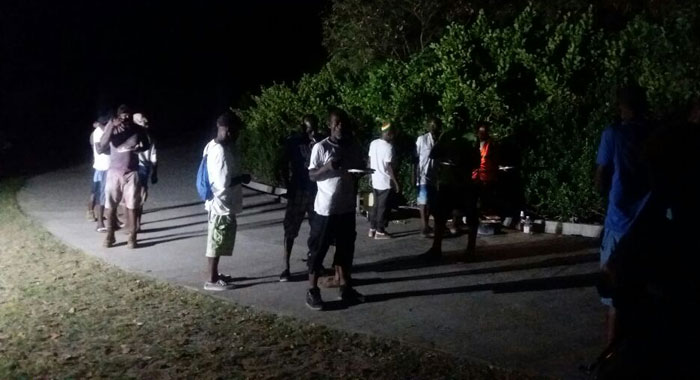 Workers were at the protest line at 1:30 a.m. today, Friday. (Photo: Terry Bynoe)

Construction workers who were told that their services are no longer needed at Pink Sands Resort were up to 1:30 a.m. Friday still protesting over wages and salaries, the non-payment of which is said to have triggered the demonstrations that lead to their dismissal.

The overnight protest was the latest development in the saga that came to the fore earlier this week, when workers blocked the roads to the resort in the “developed” north of the southern Grenadine island.

Contractor Ewan Snagg of Canouan told iWitness News around 1:25 a.m. Friday that he has been working with Pink Sands Resort for just over a year now.

He said he has been owed some EC$119,000 since last November, with no word of when the monies will be paid.

Snagg said that he received a small payment in December and another in earlier January, but has not been told when he would receive the outstanding EC$119,000 which he said he must use to pay his 35-member crew at the resort.

He said that after the initial protest action, one Alfonzo, an Italian who works at the resort, told him via telephone that the services of he and his crew are no longer required.

Snagg said he was told that his crew had blocked the road to the resort, thereby causing an inconvenience.

He said the men plan to keep up the protest as long as they could or until they have been paid.

Meanwhile, Ewan Guy, a mason who works with Snagg, told iWitness News around 1:20 a.m. that he was on the picket line to demand payment of outstanding wages.

He said he has been working in Canouan since 1998 and with Snagg for just over a year.

Guy told iWitness News that the men were trying to stage an all-night protest, although he admitted that some of them have gotten tired and had gone home for the night.

He said that about 20 men were on the protest line at the time of the interview.

Guy told iWitness News that he needs his outstanding wages to help to take care of his girlfriend and grandmother.

And, Canouan-based community activist, Terry Bynoe, who was at the scene of the protest said he was concerned that Mandarin, the new manager of the resort, has inherited or would be affected by a problem not of their making.

Bynoe told iWitness News that while he supports the men in their bid to get their payments, he was also concerned about the potential impact on workers at the report, if the management decides to walk away as a result of the protest.

In a Facebook live video around 5:30 a.m. Wednesday, Bynoe showed sections of the road that had been blocked by debris as the protest began.

He said he had been called to the scene, where persons complained about non-payment or delayed payment of wages.

Bynoe said that the roads to both entrances of the resort had been blocked and persons were demanding payment of outstanding wages.

“Workers have been speaking to me. They say they have their family, they have their children in school and as a man who comes out to work and cannot have some money to send back to their wife or their spouse or their kid have something to eat or go to school or to pay a bill [while hire purchase companies are repossessing their furniture and appliances].”

Bynoe said persons had blocked the road with a half of a tamarind tree and old appliances.

“They are demanding their money. It is very strange that these people are building their establishment. You are working with billionaires and it is very difficult to be paid by this investor on time.”

In another Facebook live video later on Wednesday, one man outlined the situation affecting the workers.

5 replies on “Midnight protest in Canouan”