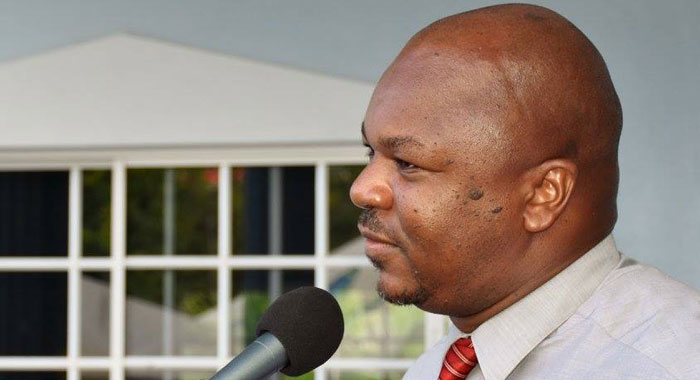 The state-owned National Broadcasting Corporation, the owner of NBC Radio, has told the Public Service Union (PSU) that it will no longer broadcast the trade union’s interactive programme aired twice a month.

And the trade union is blaming Hans King, press secretary to Prime Minister Ralph Gonsalves, for the decision.

King is chair of the board of directors of the NBC.

The PSU was informed of the decision in a terse Feb. 23 email from acting Manager of NBC, Raphael “Raphie” King to PSU spokesperson, Javelle Frank.

“I am instructed to inform the Public Service Union that the programme, PSU Speaks will no longer be aired on NBC Radio with immediate effect. The Corporation thanks the Union for its patronage, and regrets any inconvenience,” King wrote.

PSU president Elroy Boucher said that week that the NBC communicated its decision the morning after their Feb. 22 programme, which discussed the fiscal packages Minister of Finance Camillo Gonsalves announced in his Feb. 5 budget.

Boucher said that during the Feb. 5 show,  PSU teams read out to listeners the compensation packages of some state employees “from the top, comparing the top and the very bottom”.

Among those whose salaries came in for attention, Boucher said, were “people like the prime minister, ministers of government, the opposition leader, and those sort of persons, right down to the bottom”.

He said this was done to show the disparity.

“And immediately, the next morning, the letter came from the manager stating that he had been instructed to inform us that the wrong will no longer be aired That instruction, in our mind, could have only come from the board, one way or the other,” Boucher told a Feb. 27 press conference.

He said that the instruction to terminate the programme, which the union paid to have broadcast on every second and third Thursday, came from King.

Boucher said that a board does not have to meet physically to make a decision, but said it would be interesting “to know if that was a board decision or if it was his own decision”.

He reiterated his view that the government came into office on the backs of trade unions and is now disrespecting them.

“When it is an opinion, we will state what our opinion is. And we advocate not merely on behalf of public servants that we represent but we try and advocate on behalf of all workers in St. Vincent and the Grenadines.”

He said that in the past, the union has spoken out again the “grievous issues” of workers at Buccament Bay Resort not being paid, a situation he described as an “historic wrong”.

“We believe that the government should step up and pay those workers. Don’t just leave them there.”

“We attempted to address issued affecting workers, even when the workers had no representation. So it is not a programme that attacks the government. We have praised the government when it has done great,” he said.

He mentioned the Occupational Health and Safety Act, as being about the reasons for which the union has praised the government, saying that the legislation was “terrific”.

“So you cannot say it is a programme that is political in any sense. Because our membership spreads across political divide, we cannot hold a political position. We just advocate for workers of this country,” Boucher said.

“So when Hans King, who is a highly paid official, and I don’t even know if he is a public official or a public servant because he spends 80 per cent of his time doing work for the political party, not the public of St. Vincent and the Grenadines. He spends more time dividing us as a people than uniting us and we are the taxpayers who are paying him that huge salary…

“Hans King, the chairman of the Board, is the one who, we believe, gave that order. But the Public Service Union will not be silenced by anyone. The members are the ones who make the decision. The membership says what we can do and what we can’t do, because we represent the membership. And when you get to the point where what has happened there takes place, when you get to the point where a dissenting voice or constructive criticism takes place and the person in authority tries and silence those voices, you wonder where we are going as a country.

“And I’m of the view that the line between political party and state is becoming blurred. And that is a dangerous direction that the country is heading in, because when that happens, anything can happen to its citizenry. Our democracy is under threat when such things happen. And we have to be very careful about that,” Boucher said.

iWitness News has been unsuccessful in repeated attempts to reach King via mobile phone.

Searchlight newspaper has quoted him as saying he had no comment to make about the issues.

The PSU says it will again explore its options regarding broadcasting its radio programme, saying that when the decision was made in 2014, the union attempted to shy away from radio stations that are perceived as politically aligned.