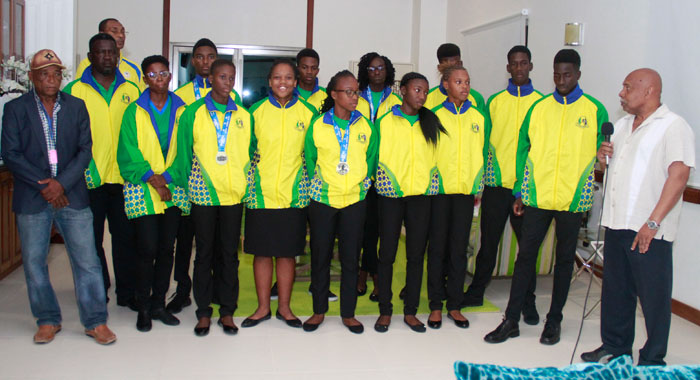 The performance of the St. Vincent and the Grenadines team at the CARIFTA games is an example of what can be achieved with discipline, commitment, and hard work despite the absence of top-notch facility.

But even as he made this point as he welcomed the athletes back to St. Vincent on Tuesday, Minister of Sports, Cecil “Ces” McKie acknowledged the contribution that a synthetic track can make to improving their performance.

SVG won three gold medals, including its first in swimming, in the Games which took place in The Bahamas and Jamaican over the Easter holidays.

Speaking at a welcome reception at the Argyle International Airport on Tuesday, McKie said that SVG has a limited amount of top facilities, noting that the nation has 64 hard courts and 53 playing fields.

“But it just shows that discipline, commitment, and hard work could get us where we want to go even as we develop the various facilities,” he said.

The minister added: “I know the call will come for us to improve as quickly as possible on the existing facilities. We have seen what has happened, especially in swimming where we invested, worked along with the swimming association and they have seen quicker results, maybe, than most of the other sporting disciplines, but the same goes for track and field.

“And as you know, we have had a stadium, a synthetic track on the agenda of the government and of the ministry for some time now. So, it means that your performance, the outstanding performance there, would call on the nation to push even harder, to bring into realization a synthetic track so you can do your finishing touches.”

McKie noted the athletes’ performance and said that the nation can achieve even without a synthetic track.

“But I think it is important for us to have that facility and to do the finishing touches so that you can go out there and be even more competitive than you are now,” he said.

McKie noted the national support that the athletes have garnered at the games.

“What we saw on our television sets indicated very clearly to us that you went out there and gave your best and represented St. Vincent and the Grenadines with pride. Never in our wildest dreams we would have expected to come home with three sets of gold medals. One set was great and then we heard about the second set and then we heard about the third set, and therefore, the nation is celebrating with you this evening.”

The sports minister said that scouts also had their eyes on the athletes and will do so again at the Commonwealth Games, which will be held April 4 to 15 on the Gold Coast, Queensland, Australia.

“And this will not be your last opportunity to catch the attention of those you need to catch to go on to the next level, to college, to university,” the minister said.

He told the athletes that their performance at the CARIFTA games will inspire many other young athletes to want to be like them.

“You went out there and you competed against nations in the region that are much more advanced than we are in terms of the development of track and field and swimming but yet we were able to go out there and compete,” he said.

One reply on “Sports minister notes need for synthetic track”