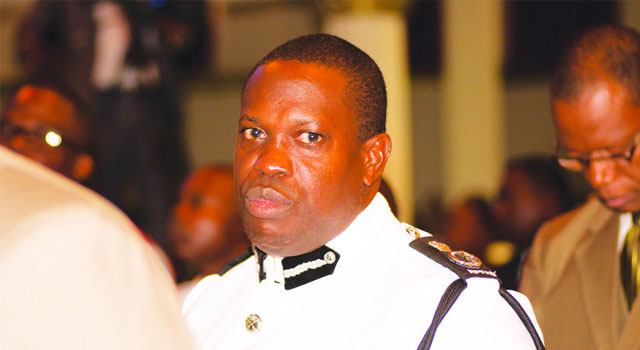 Vincentian Wendel Robinson has been suspended as police chief in Antigua, amidst a sex scandal. (Photo: Antigua Observer)

Vincentian Wendel Robinson has been suspended with immediate effect as Commissioner of Police in Antigua and Barbuda, about two years after he was confirmed in the post.

The Antigua Observer newspaper says that Robinson was suspended amidst a sex scandal that has triggered an investigation, which is being led by his successor in the post.

The suspension order came Thursday afternoon from the Police Service Commission in a letter signed by its chairperson, Kelvin John.

Robinson is at the centre of an investigation regarding his alleged sexual harassment of several of his colleagues who complained to the commission last month.

Deputy Commissioner of Police Atlee Rodney will be taking over from Robinson as the nation’s police chief and will also be investigating the allegations.

The suspension also comes a day after the PSC met with the chair of the Police Welfare Association, Inspector Claudina Morgan, who reportedly outlined the concerns of the officers affected, the Antigua Observer has reported.

The three junior cops who made the allegation against Robinson are asking for time off due to stress related to the scandal.

Robinson was confirmed as Antigua and Barbuda’s top cop in early 2016, one year after he began acting in the post.

He replaced Vere Browne, who had been suspended over his refusal to publish the police promotions list and at the same time he was fighting the promotions

In announcing Robinson’s confirmation as police chief, National Security Minister Steadroy “Cutie” Benjamin had said that the government was satisfied with his leadership of the constabulary.

Benjamin said serious crimes had decreased because of changes implemented by Robinson or upon his recommendation.