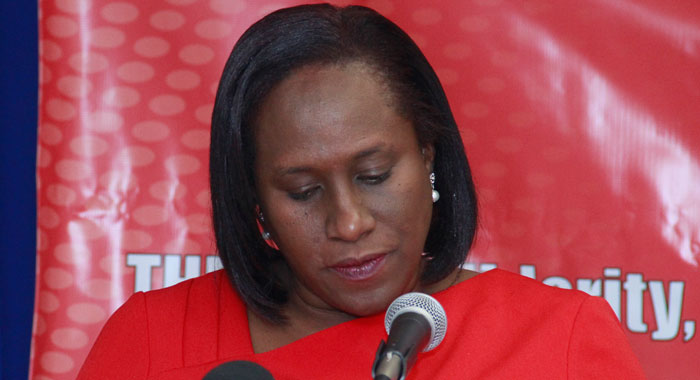 Less than one week after being installed as head of the Teachers’ Union, Wendy Bynoe has expressed concerned about the slow pace of consultation on pension reform in St. Vincent and the Grenadines.

“Our constituents, the members of the Teachers’ Union and the other public sector workers are deeply concerned that, to date, we have not received an opportunity for the unions to be engaged with the government in a collaborative manner in an effort to have this enormous but important matter dealt with,” she told a town hall meeting held in Kingstown on Tuesday to analyse the EC$993.5 million fiscal package for 2018 that Parliament approved in February.

“The view of the trade unions is that retired public officers must not be worse off. The nation and our workers are depending on us,” she told the event, organized by the Teachers Union, Public Service Union, and Employers’ Federation.

She said that through the advocacy of their union, many teachers with degrees were appointed to graduate positions recently.

“The Teachers’ Union applauds this effort but we note that some of our teachers in similar positions and some who have retired have not benefitted from this. We would like for these abnormalities to be dealt with as a matter of urgency,” Bynoe said.

She said that principal working conditions fail to find prominence in this year’s budget.

“It is our view that we are invited too late in the budget cycle,” she said, adding that the trade unions are “a bit concerned with the unprofessional approach and breach of protocols of communication, for example, now for now phone calls to invite us to a ‘budget consultation’.

“We are also alarmed with the way in which our communication to the government is met with silence. We view this non-acknowledgement of correspondence as unprofessional and not in keeping with expected protocol.

She, however, said that the union welcomed some of the fiscal policies that Minister of Finance Camillo Gonsalves announced in his first budget.

Bynoe said that given the current economic scenario in St. Vincent and the Grenadines, she is sure that the corporate community is pleased with the reduction in corporate taxation from 32.5 per cent to 30 per cent.

“We are, however, concerned with the rising cost of living and the rate of inflation which continue to negatively impact disposable income for most households.

“It is important that the budget focus a lot more on youth development, youth empowerment through sports and culture and youth employment. Greater economic planning and wise financial management are needed if workers are going to see meaningful benefits for their hard work. Let me once again invite you to participate fully,” Bynoe said.