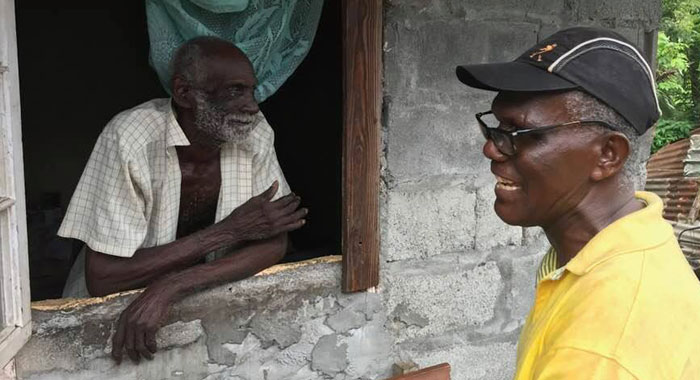 In this undated photo published recently on Facebook, former Member of Parliament for North Windward, Monty Roberts, interacts with an unidentified constituent.

Former Member of Parliament for North Windward, Monty Roberts, has spoken about his interest in returning to electoral politics, almost two decades after he left office.

Robert did not contest the 2001 general election 12 years after he was voted into office on a New Democratic Party (NDP) ticket.

Speaking at an NDP rally in Sandy Bay on Saturday, Roberts said that he has been a member of the party from its inception and served as one of its ministers for 12 years and nine months of the party’s 17 years in office.

“I know why you are here tonight because a lot of people called me and ask me, ‘Will you be in Sandy Bay?’ and ‘Will you be speaking?’

“I know why you’ve come. You want to hear whether or not I am going to be the candidate for this constituency in the next elections.

“But I want to ask you here tonight, all of you from this constituency whether or not you really and truly want to have me back as the candidate?” Roberts said to shouts of “Yes! Yes!”

“Well, I almost know what the response was going to be like because over the last six months or so, I have been paying regular visits into the constituency and after 17 years in retirement, I was really amazed with the sort of reception I am getting from people in this constituency. You really humbled me,” Roberts said.

“And I know why my reception was such a great one. Because even though I have been in retirement for 17 years, people have not forgotten what this New Democratic Party and what this humble servant has done for this constituency over that period of time.

“But as I look at North Windward now, and especially so, this area of Sandy Bay, I am very ashamed, very, very ashamed of what this community and this constituency has been reduced to by the Unity Labour Party.

“Somebody says it is forgotten. I say it has been abandoned,” Roberts said and went on to detail his views of employment, agriculture, and public infrastructure in the district.”

Roberts noted that he is not the candidate for the constituency and some members of the audience said “yet”.

He said that said that while he is not the candidate, he has begun to work on a programme for the consistency.

“We are gonna work on it together, because we have to execute it together. I can’t do it alone. So, when we get over the ‘yet’, when we get past the ‘yet’, I would come to you in the communities, we will sit down together, and we will plan together for proper programmes to deliver again this constituency here.

He noted that a person now turning 18-year-old was just born when the NDP left office.

“So all that we did, you see what happened? Are you with me? You get that? So we have a serious education programme to do and that is exactly what we have been doing as I move around slowly but surely with some very good helpers in this constituency.

“Somebody might say ah blowing me own trumpet. But if is my trumpet, who supposed to blow it?

The NDP lost the North Windward seat in 2001, when it was booted out of office, retaining just three of the eight seats it held in the previous parliament.

The Unity Labour Party’s Montgomery Daniel has been representing North Windward since March 2001 when the ULP also came to office.

If Robert returns to electoral politics, he would be the second person to come out of retirement to contest a seat that they have represented in Parliament.

In 2015, Sir Louis Straker ended five years of retirement to contest the Central Leeward seat for the ULP. He had previously represented the district from 1994 to 2010.

10 replies on “Monty Roberts to return as NDP candidate?”