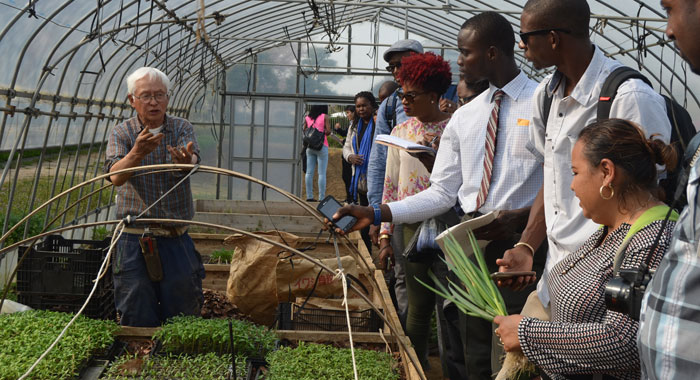 During the tour, participants learned various agricultural practices and technologies including organic and nature farming, permaculture, and protected agriculture such as vertical farming, solar plant factories and light plant factories.

They were also exposed to innovative advancements including membrane and hydrogel technologies.

With countries experiencing increased incidences of drought, attributable to climate change, agriculture is a sector that requires technologies for adapting to changing conditions in order to support food security.

Taletha Laudat, participant from Dominica, noted after a visit to the Permaculture Centre of Japan that, “the concept of permaculture is an ideal one that should be implemented in our cropping system even after the passage of Hurricane Maria [which brought devastative damage to the country in September 2017].”

While the study tour primarily featured North-South cooperation, South-South knowledge sharing was evident among participants who were able to share techniques and tools that have worked in their respective countries.

The Deputy Resident Representative for the UNDP Sub-regional Office for Barbados and the OECS, Chisa Mikami expressed her delight at the opportunities the study tour presents for the Caribbean and Japan.

She said: “J-CCCP’s mandate to strengthen knowledge networks through North-South and South-South cooperation is being realized in this tour. Caribbean nationals are sharing among each other and at the same time, being exposed to new methods and technologies. Japanese organizations are also benefiting from new avenues and markets for technology transfer.”

The tour concluded with a closing ceremony, hosted by the UNDP Representation Office in Tokyo where Japanese counterparts, students and researchers were invited to learn more about the Caribbean and how farmers in the Caribbean are applying various techniques to adapt to changing weather patterns, associated with climate change. Participants were also presented with certificates of participation during the ceremony.

“We are truly grateful to the government of Japan for supporting the J-CCCP. The impact of this tour will continue as the participants will bring the knowledge and technologies that they were exposed to in Japan back to their home countries, for further sharing and adaptation,” remarked Director of the UNDP Representation Office in Tokyo, Tetsuo Kondo.

The J-CCCP is a regional initiative working in eight Caribbean countries.

The programme of work under the J-CCCP is in line with the Paris Agreement on Climate Change, to keep global warming below 2 degrees Celsius and to drive efforts to limit the temperature increase even further to 1.5 degrees Celsius above pre-industrial levels.

The project is implemented by the United Nations Development Programme with funding from the Government of Japan.