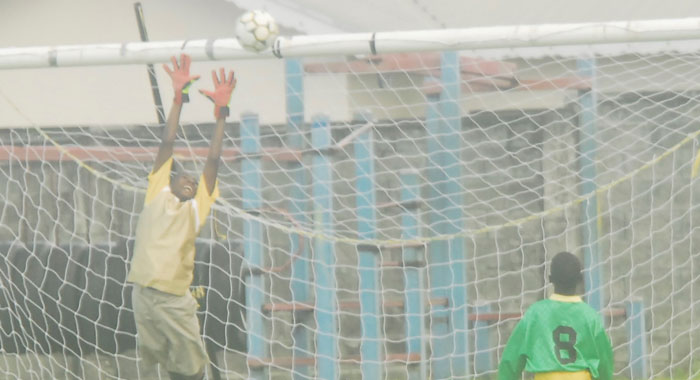 A fingertip save by the DESCO FC custodian.

Aldeus Charles and Amos Thomas each hit hat-tricks as Sparta FC slammed DESCO FC with an 11-nil whipping at the Chili Playing Field, on Saturday in another round of matches in the St. Vincent and the Grenadines Football Federation- St. Vincent Brewery 2018 National Under-14 Club Championships.

At the break, the score was 4-0, and 7 goals were scored as Sparta FC took full advantage of their physical superiority.

Adding to DESCO FC woes were Rayseon Mathias with goals in the 40th and 56th minute, Shemron Philips in the 8th, Tyreke Gage in the 13th, and Tyrel Jacobs in the 23rd minute, as Sparta FC ran away 11-nil victors.

In the second game of the afternoon at the Chili Playing Field, Owia United lost 0–3 to SV United.

Darani Williams, in the 11th, Javon Collins, in the 27th, and Pierce Henry, in the 60th minute, were the scorers for SV United.

Ryan Ellis opened the scoring for Avenues United FC in the 6th minute, and followed with another in the 10th minute.

Shackwan Dopwell, with goals in the 15th and 42nd minute, Jaran Ince in the 16th, and Kadel Hector in the 18th minute, were the other goal-scorers in the Avenues United FC victory, while Rudolph Caine pulled one back for Largo Heights.

In another game at the Campden Park Playing Field, Jebelle FC squeezed past Camdonia Chelsea 1-nil, courtesy of the 46th minute goal by Mitchum John.

And, on Sunday, at the same ground, Toni Store Jugglers again lost, this time to Glenside Ball Blazers 0-3, as 28 goals were scored in a hectic weekend of Under-14 football.