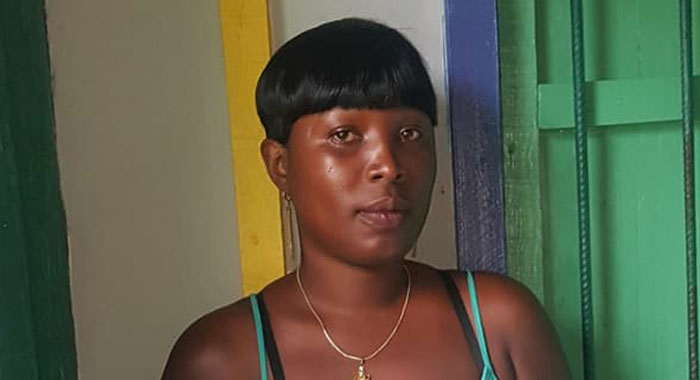 Jael Matthews, a mother of three, has not been paid a cent in severance three years after she was laid off from KFC. (Photo: Jael Matthews/Facebook)

A former employee of KFC (St Vincent) Ltd., then a subsidiary of St. Clair Investment, is using the occasion of International Workers’ Day – today, May 1 — to remind the nation that she and her former co-workers are still awaiting severance payment, three years after being laid off.

Some 100 workers were placed on the breadline on March 9, 2015, when receivers took over and closed the doors of the then three KFC outlets in St. Vincent and the Grenadines.

Later that same year, Yum Restaurants Inc., the new holders of the KFC franchise, did not re-hire many of the former KFC employees, although many of them were among the hundreds of persons who turned up for interviews in June 2015.

And, among those still waiting expectantly for their severance payment is Jael Matthews, a 36-year-old mother of three, who worked at the restaurant for seven years.

“Sometimes, I try not to think about it. And when I do think about it, it upsets me to see I have children to feed and right now things are hard, jobs out there are hard to find and nobody is looking into the matter,” said the mother of 17-, 14- and 6-year-old children.

Matthews said that an aunt in the United States has set up a small business in St. Vincent of which she (Matthews) is in charge.

“But things are always good or turn out to be good. Sometimes, it is slow,” she told iWitness News.

“So those kinds of things frustrate me sometimes. And besides, I have my kids to send to school.”

She said the last thing she heard was about some legal proceedings in which the Labour Department might have been involved on behalf of workers.

She, however, told iWitness News that she is hoping to be paid.

“I always hope that someday it will come through. I have never really given up because I worked really hard and it is hard to see I am going to leave all those years down there and I used to have to hustle day and night in hot and cold. It is hard sometimes when you sit down and study it,” the Campden Park woman said.

She told iWitness News that she worked at the former KFC depot in Campden Park, where workers cleaned and marinated chicken.

However, management moved the depots to the outlets in Kingstown and Arnos Vale.

Matthews completed the application process when Yum Restaurants took over the KFC franchise and had an “open call for vacancies” in June 2015.

However, she only got a part-time job for the Vincy Mas 2015 after she went to inquire about a job to help to buy her children’s books.

The former KFC worker said she does not know how much money she should be getting as a severance package.

“All I know I looking for my years that I was there and my holiday pay because I didn’t get any holiday at the time. I was supposed to go on vacation in August.”

She said that she was also speaking on behalf of other former employees who are in a similar situation.

“I am not putting this out for myself only. It is for the other workers who worked with me also so that the public can know what is going on because since we were laid off, everybody is on a shutdown; nobody is talking about it or considering it or anything.

“When we, former co-workers meet up, we talk about it. It is kind of hard,” Matthews told iWitness News.