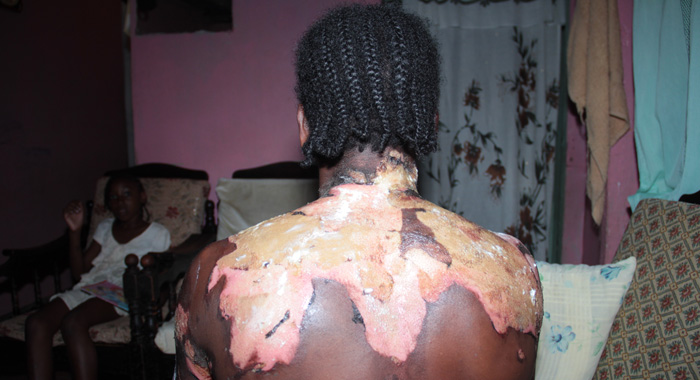 Cuthbert Victory sustained burns on April 9, 2016, when Pastor Nigel Morgan, his wife, Althia, and their daughter, Krystal, poured a hot liquid on him. (IWN photo)

Defence counsel, Kay Bacchus-Baptiste, in a failed attempt to keep her clients out of jail, told the Kingstown Magistrate’s Court on Monday that the burns her clients inflicted on Cuthbert “Mafia” Victory two years ago were not as bad as they seemed.

“The perception is worse than the actual fact,” she said, citing the medical report.

“What is going on here is the perception and the public pressure. So I believe that my learned friend (the prosecutor) feels that to satisfy the public he has to say a custodial sentence,” the lawyer said, adding that this cannot be reasonable in the circumstances”.

Bacchus-Baptiste was addressing the court in response to a submission by Senior Prosecutor Adolphus Delplesche, who asked that Pastor Nigel Morgan, his wife, Althia, and their 23-year-old daughter, Krystal (note correct spelling of name), be jailed for pouring hot water on Victory on April 9, 2016.

Victory suffered burns to his back, chest, face and arms.

“A minor burn. It looked bad. Take off his (Victory’s) shirt, he is completely healed. A custodial sentence, your honour, would not be just in the circumstances,” Bacchus-Baptiste told the court as Victory stood in the plaintiff’s dock.

The older Morgans held Victory so that he could not move while their daughter poured a kettle of hot liquid — said to be water — on his back in a gutter near their Hopewell, Mesopotamia home.

Victory, a resident of Caruth Village, Mesopotamia, had gone to Hopewell  — as he frequently did — to visit a friend — one of the Morgans’ neighbours — and an argument ensured between Victory and the older Morgans over the music that Victory was playing from a device said in court to be a jukebox.

After hearing the guilty verdict, Bacchus-Baptiste told the senior magistrate that his decision — a lengthy written judgement — did not treat with “the various inconsistencies” between the statements of the prosecution witnesses.

She said there were “grave inconsistencies” that left reasonable doubt in her mind, adding that her cross examination of Victory showed gross inconsistencies between his statement to the police and what he said in court.

Bacchus-Baptiste said that the case was not an easy one, and in mitigation, noted the character witness evidence of Pastor Manson Shortte, the only independent witness that the defence called.

She further said that there is the issue of good character and the manner in which the incident unfolded.

Bacchus-Baptiste said there was no doubt that Victory contributed to what happened.

She said it was clear that Victory slandered Mrs. Morgan in front of his face by telling her “hurtful words” that she lowered herself when she married her husband.

Victory denied making such a statement.

The lawyer said Victory’s alleged use of the word couldn’t amount to self-defence on the Morgans’ part.

“It is clear in my mind that it is the behaviour of Mafia that caused this incident,” the lawyer said, adding that the incident was not planned.

She asked that a custodial sentence not be imposed, adding, “not with their character — totally clean records and the fact that we are dealing with a family who were really defending one another — whether it was legal or not. Certainly, that’s the issue.”

Regarding a fine, Bacchus-Baptiste reiterated that the charge for which her clients were found guilty is not a simple matter.

She said the court has to balance the interest of the community and the defendants, adding that the matter has been one with “so much pre-trial publicity that it probably should not have even been heard in St. Vincent”.

She said it was only because of the “almost impossibility” of asking that the matter be heard in a different jurisdiction and the cost involved that she did not make such a request.

She said that while she does not take on the statements made about her, they show the community in which the trial took place and “the pressure that was brought to bear on this matter.

“And I am asking your honour not to take that pressure on in terms of your sentence,” she said and asked for balance in the interest of all parties and asked for a fine.

“I know that because of the press and the public and everything, it is almost like a circus,” she said.

The magistrate said that considering the principles of sentencing and his own precedent — having jailed for two years a young lady who threw water on her boyfriend — he was sentencing each of the Morgans to four years imprisonment.

Bacchus-Baptiste immediately signalled her intention to appeal the sentence and to apply for a stay of execution of the sentence until the appeal is heard.