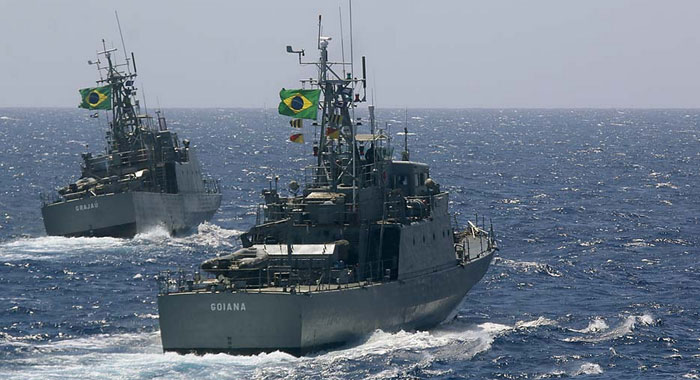 Brazilian naval vessels will make an inaugural visit to St. Vincent and the Grenadines from May 5 to 9 as part of the annual Operation CARIBEX.

The vessels will be docked at Port Kingstown.

Each year, the Brazilian Navy conducts Operation CARIBEX, sending a task force to navigate Caribbean waters and visit ports of friendly nations in the region.

The objective of the mission is carrying out military drills at sea, in order to increase training and operational readiness among the ships involved, as well as to contribute to closer ties of friendship with the countries visited.

The Task Force is composed of the Patrol Ships Macau (Flagship), Bocaina and Grauna , from the Northeast Patrol Flotilla, with 110 officers and sailors.

These vessels are intended for the patrolling of Brazilian jurisdictional waters, and must carry out various tasks, as surveillance and defence of the coastline, coastal sea areas and areas of exploration/exploitation of oil at sea, and help in the defense of port installations, the repression of illegal activities (illegal fishing, smuggling, drug trafficking and pollution of the environment).

In periods of peace, the Ocean Patrol Ships contribute to the safety of coastal facilities and maritime platforms against acts of sabotage and carry out operations of search and rescue in Brazil’s area of responsibility.

They also “show the flag” in the friendly nations of the Caribbean, to reaffirm that they can count on the help of the Brazilian Navy in the case of natural disasters.

The presence of these vessels in Kingstown is linked to the growing rapprochement between Brazil and St. Vincent and the Grenadines, with the entry into force of the Bilateral Agreements on Educational and Cultural Cooperation between the two countries and the signing of the Agreement on Technical Cooperation.

In this last area, the Brazilian Navy offered the Coast Guard of SVG two vacancies for a course of hydrography and navigation for officers, to begin what is expected to be a fruitful collaboration between the two naval entities.

During the stay in Kingstown, social activities are envisaged, including a soccer match between the Task Force team and a team from the SVG Coast Guard on May 6 May, at 3 p.m., at the Richmond Hill Playing Field.

The public is invited to visit the ships and watch the game.