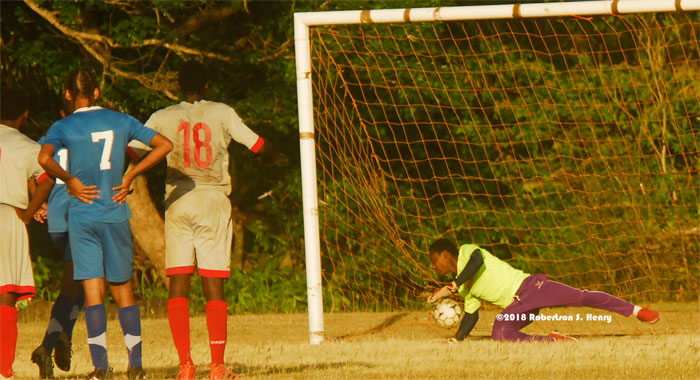 There were convincing victories for BESCO Pastures FC, and Avenues United FC, on Saturday in National Division 2 matches at the Layou Playing Field.

In the first game of the double-header, BESCO Pastures defeated Largo Heights FC 4-0; the half-time score was 1-nil in favour of BESCO from a Doravin Hendrickson 24th minute goal.

In the second half, J’Mario Fraser made it 2-nil in the 52nd, with the third and fourth goals scored by Dequan Springer in the 72nd, and Xavier Paul in the 75th minute, to give BESCO Pastures FC a 4-nil victory.

In the second clash, Avenues United FC had their afternoon work stained when a penalty was given following a handled ball by one of their defenders in their game against Camdonia Chelsea.

Earlier, Raheem Westfield had sent Avenues ahead in the 6th minute, but Rayshean Warren equalised from the penalty spot for Camdonia in the 38th minute.

The teams went into the break with Avenues United enjoying a 2-1 lead after Delano John found the back of the Camdonia Chelsea’s net in the 40th minute.

Following the resumption, Lasana Wilson struck in the 52nd and 54th minutes respectively for Avenues United, and although chances were there for the taking, their strikers were unable to finish the job.

Camdonia Chelsea had their opportunities, the most telling one was when the Avenues goalkeeper was beaten by an awkward bounce, but quick thinking by Joel Quashie averted disaster.

Quashie quickly ran back and neatly cleared the ball off the line, with his momentum carrying him into the nets where he remained entangle for a few seconds before being able to free himself.

For North Leeward Predators, Clem Westfield scored the equaliser in the 16th minute, following a Camal Bess 11th minute strike for Bequia, while Mark Brown scored the eventual winner for Bequia in the 55th minute.

On Sunday afternoon, at the Sion Hill Playing Field, a brace by Aaron Collis in the 40th and 52nd minutes respectively, led Sion Hill FC to a 2-1 win over System 3.

System 3 goal was score by Kiname Dopwell in the 61st minute.

At the Chili Playing Field, on Sunday afternoon, Jebelle FC was enjoying a 2-goal lead till the 20th minute when their game plan began to unravel.

Bhaker Waith in the 3rd and Kedaeas Duncan in the 13th had given Jebelle the lead, but that was erased in the 20th minute by Enrique Millington, Nafer Berklay in the 28th, and Ralique in the 42nd minute.

The half time score was 3-1 and Kimarie May then put the game beyond salvage with Jebelle FC’s fourth in the 82nd minute; the final score 4-2 in favour of Jebell FC.

SV United FC defeated Pride and Joy FC 2-1 in the second game of the double-header on Sunday afternoon, also at the Chili Playing Field.

For SV United, the goals were scored by Alex Adams in the 23rd and 42nd minutes, while Ameein John scored Pride and Joy’s lone goal in the 17th minute.