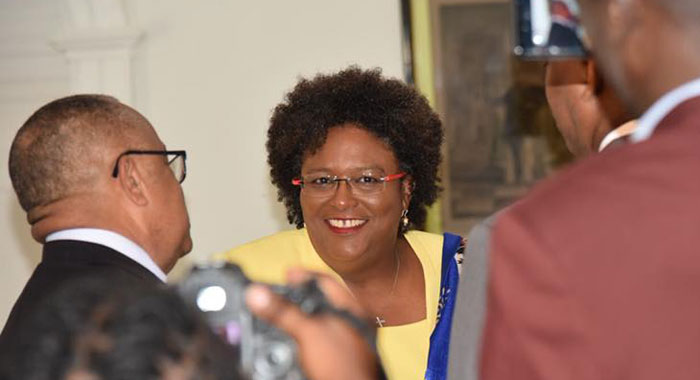 BRIDGETOWN, Barbados (CMC) — Prime Minister Mia Mottley on Saturday named a 30-member Cabinet less than 48 hours after she led her Barbados Labour Party (BLP) to a clean sweep of all 30 seats in the Parliament.

She has indicated that plans are afoot to reform the constitution to allow for the main Opposition party to name two individuals in the Senate, given the results of the May 24 general election.

The Cabinet, which was sworn-in on Sunday, includes 26 ministers, two parliamentary secretaries, and two special ambassadors.

Mottley, the first woman to head a government in this Caribbean Community (CARICOM) country, said that the Cabinet is “relatively large because I have not only considered the mandate given to us by the people, but also the scope of the work to be done and the level of expertise at our disposal among elected members”.

In a radio and television broadcast, she said she would be holding the ministers to “very high standards of efficiency and productivity and therefore offered to share the workload across a significant portion of the parliamentary group”.

She argued that the theory of a small Cabinet would “create an unrealistic setting for members to function effectively and to produce in this prevailing environment.

“Given the dire state of our economy and the tremendous work that will be involved in rescuing and rebuilding this country, the salaries of a few extra ministers are insignificant, given that there will be extra savings from the containment of wastage and the curtailment of corruption in my Cabinet.”

The 53-year-old prime minister said that the Cabinet includes the “traditional bedrock portfolios” while embracing new concepts and initiatives.

She said that these are all vital components of the new “multifaceted Government and economy we are seeking to create, all of which was outlined very clearly in our manifesto”.

In her broadcast, Mottley said that given the composition of the new Parliament and in keeping with the provisions of the law that three members of the Senate are appointed to the Cabinet, “we shall comply with the constitution”.

“It is in that vein we have constructed the new Government of Barbados,” she said, adding that she has discussed the situation with Governor General Sandra Mason, in particular the fact that the constitution does not make provisions for opposition senators in the absence of a leader of the opposition.

“We have discussed the need for an urgent amendment of the constitution to allow the opposition political party securing the highest number of votes to recommend two appointments to the Senate because we believe that even though there has been no official leader of the opposition, my Government would wish to have accommodated the views of the main opposition party that secured the largest amount of votes,” she said.