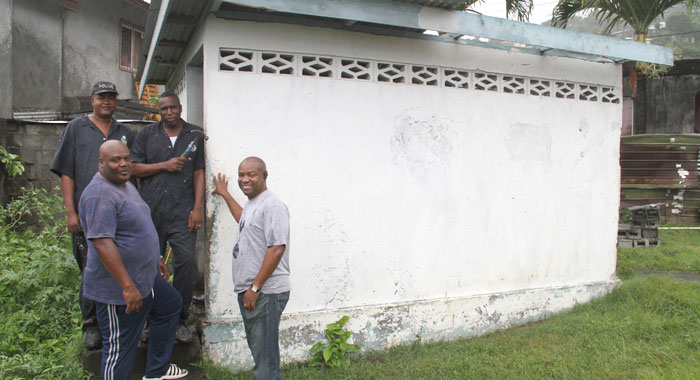 Commissioner John, right, ASP Bailey, left, and other officers at the bath in Sharpes as work was about to begin on May 26. (iWN photo)

The community bath in Redemption Sharpes is receiving a facelift and the Playing Field in Ottley Hall will be fitted with goalposts as part of activities to mark Police Week 2018.

Further, officers will argue, in a debate, for and against the decriminalisation of marijuana for medicinal and recreational uses, clean up sargassum from beaches and donate food baskets as part of the week of activities.

After a decade’s absence, the event has returned to the police calendar.

Acting Commissioner of Police, Colin John told iWitness News in Redemption Sharpes on Saturday that head of the Police Week Committee, Assistant Superintendent of Police Trevor Bailey and his team are doing “an excellent job”.

John said that as part of Police Week, officers will embark on a number of community projects, including the Redemption Sharpes Public Bath and the Ottley Hall Playing Field.

“We solicited donations from several business houses,” John said, adding that in addition to the community projects, the police force will be handing out food baskets to needy persons in several communities.

Officers will also help in removing sargassum from beaches on the east coast of St. Vincent.

“I think it is a way of mending the relationship with the public and showing the police in a different light, instead of police just there to arrest and charge whenever a person commits an offence,” John said of the week of activities.

“I hope that this venue will enhance the relationship with the public and help the police and the public to work in conjunction to solve crimes and to serve the people of St. Vincent and the Grenadines better,” the police chief told iWitness News.

Meanwhile, Bailey said that on Tuesday (today), the police will have a debate at the Calliaqua Town Hall on the topic “Should Marijuana Be Decriminalised For Medicinal And Recreational Purposes.”

“We will be adding our voices to the discussion,” he said, adding that three officers will speak in support the topic, while three will argue against it.

On Wednesday, at 6 p.m. at the Peace Memorial Hall, there will be a lecture on leadership and management by Joel Providence, manager of Coreas Hazells Inc.

Friday’s event will begin with be a 5k road race from Dougan’s Corner in Prospect to the Arnos Vale Playing field.

The race will be followed immediately by the sporting activities.

During that event, the six policing divisions will engage in “a colourful march past” led by the Police Band, Bailey said.

During the sports day, there will be the conventional and other races.

But one particular race, dubbed “Late for Work”, is expected to generate much excitement and entertainment.

Different items of the competing police officers’ kits will be spread across a distance of 100 metres.

The competing police officers are expected to get dressed as quickly as they can.

“And, at the end, the commissioner will be there, he will carry out an inspection and ensure that you are properly clad and you are clean and tidy.

“So if, for example, your shoe is at the 80 metre mark, you can’t sit and put on your shoe, because your pants might get dirty,” Bailey said, adding that the first person to present him or herself for inspection by the police chief might not necessarily be the winner of the race.

The week will climax at the police canteen on Saturday, when the winners will receive their prizes and a “cool down” event will be held.

Bailey encouraged the public to come out to the public speaking, lecture, and sports events.

He told iWitness News that Police Week is critical for showcasing the talent within the organisation and to forge deeper the partnership between the public and the police.

“Often, some people figure that the police only come into their lives when an offence is committed and we have to effect an arrest. That is just part, but there are other aspects that we get involved in and the week shows the human side of us and it is important that we have the week and over the years, people have been partnering with us,” he said.

Among the businesses that have supported the projects and activities are Browne’s Hardware, Coreas Hazells Inc., L.A. Unique Industries, General Hardware, C.K. Greaves & Co. Ltd., and Moses Douglas of Rockies.

“We are extremely grateful for all the assistance given to us by the business sector,” Bailey said.