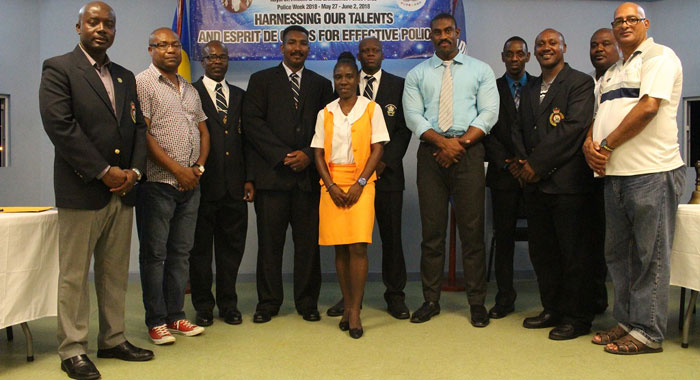 Police officers, their families, and members of the public gathered on Tuesday to witness a historic debate, where six officers debated the question, “Should marijuana be decriminalised for medicinal and recreational use in SVG?”.

The debate formed part of the various activities for Police Week 2018.

At the conclusion of the debate, the judges, Rene Baptiste, Cecil “Blazer” Williams, and Sylvia Jack, a retired educator pronounced Dick as the overall winner with a total of 300 points.

Second place went to Cummings with 291 points and Smith took the third position with 258 points.

The “for” team was also adjudged the overall winners of the debate.

Acting Commissioner of Police, Colin John, who was in attendance made brief remarks, highlighting the importance of the event.

He stated that being able to debate is a skill that every police officer should have, as it possesses practical benefits for the police, which aids the officer to present and articulate his/her point in a convincing manner.

John said that being able to debate effectively is a pivotal factor in the presentations made at court.

The commissioner went on to highlight that he has observed police officers going to court and giving evidence in a manner that is below the standard of competent police officers and stressed that this debate should be looked at as a practical exercise.

This exercise, he stated, helps to enhance the skills and knowledge of police officers.

The police chief thanked the participants for making the event possible by volunteering.

He said it is his fervent hope that at the end of the debate, the police would be in a better position to police St Vincent and the Grenadines, in light of the possible changes to the legislation in respect of Marijuana consumption.

The prizes for the winner are as follows:

1st place – $500, The Commissioner of Police Trophy and a certificate

2nd place – $300, The Deputy Commissioner of Police Trophy and a certificate

3rd place – $200, the Assistant Commissioner of Police Trophy and a certificate

The prizes will be awarded at the prize giving and entertainment ceremony scheduled for Saturday at the Police Canteen commencing at 6 p.m.

The Police Public Relations Department advised that the views expressed at the debate are the personal views of the debaters and not those of the Royal St. Vincent and the Grenadines Police Force.

The topic was debated for the sole purpose of Police Week 2108.