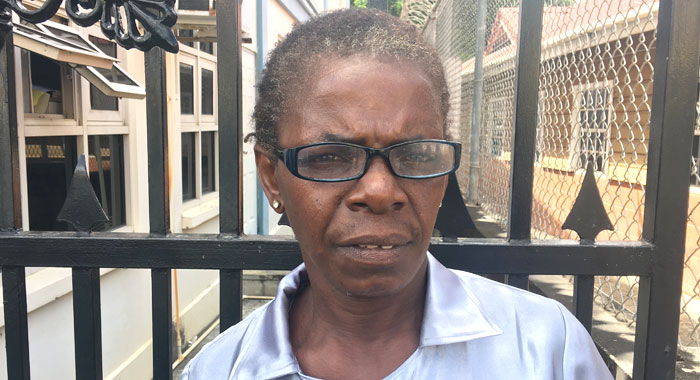 Gailene Farrell thinks that the charges against her are moving too slowing through the court system, especially since she claims to be innocent. (iWN photo)

The mother of the former model who made national headlines after being charged earlier this year says she (the mother) is “frustrated” by the court system.

However, Gailene Farrell’s frustration has nothing to do with the charge against her daughter, Yugge Farrell, but the one that she and her common-law husband faces.

“I am frustrated by it and why I know I am frustrated is because ah know ah innocent,” Gailene told iWitness News outside the Serious Offences Court in Kingstown on Wednesday.

Gailene and her common-law husband, Calvert Charles, have made several appearances in court in connection with a charge that on Nov. 1, 2017 they attempted to murder fellow Lowmans Bay resident, Edward Durrant.

The couple is also charged with arson in connection with a fire at the man’s home on the same day.

The Crown has alleged that the couple lit the man’s house on fire and chopped him as he attempted to escape.

The commencement of the preliminary inquiry into the matter has been adjourned several times.

On one occasion, in February, Senior Prosecutor Adolphus Delplesche asked for an adjournment, telling the court that he was yet to receive the file from the investigator.

The prosecutor noted that the matter was still within the timeframe for the disposal by the court of such matters.

On Wednesday, the matter was adjourned again, with June 11 set as the date for a paper committal.

A paper committal is a proceeding in which the magistrate reads the witnesses’ written statements and decides on that reading whether there is enough evidence to send the case to trial before a judge and jury at the high court.

Paper committals are less time consuming than preliminary inquiries, in which each witness comes and testifies verbally.

But Farrell, who was not allowed to plead to the indictable charges, denied that she or Charles were guilty of the crimes for which they have been accused.

“A 53-year-old woman like me? This man (virtual complainant) is a man is me brethren [who] does dey close to me. The only thing me and this man never do is have sex and kiss and hug up…

“The man is me brethren,” she said, adding that they are falsely accused.

She was also not impressed with the work of the investigator, Detective Corporal Philbert Chambers.

Meanwhile, her lawyer, Grant Connell, told iWitness News separately on Wednesday that to stop any further delay there will be a paper committal.

Farrell’s daughter, Yugge, made national headlines after she was charged with using abusive language at Karen Duncan-Gonsalves, wife of Minister of Finance Camillo Gonsalves.

Yugge, a former model, later claimed that she was in a years-long extra-marital relationship with the finance minister, who is the son of Prime Minister Ralph Gonsalves.

The finance minister, apparently following the advice of his father to maintain “a dignified silence”, has not commented on Yugge’s allegation.

Yugge returns to court in December for the next hearing in the matter.

One reply on “Yugge’s mom ‘frustrated’ by court case”