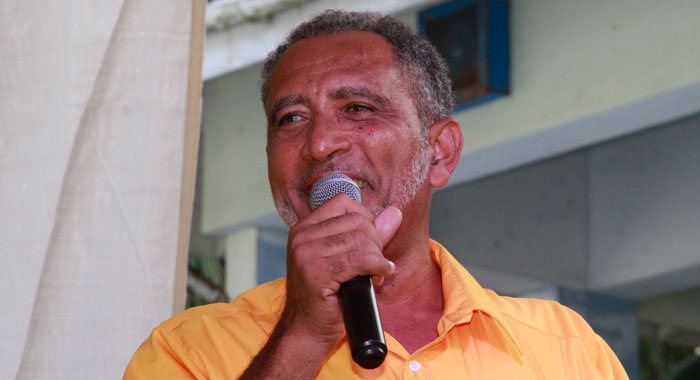 Leader of the Opposition Godwin Friday has appealed to Vincentians not to fear a future under a New Democratic Party (NDP) administration.

“You have known me for the past 17 years in our Parliament and more recently as the leader of the NDP. I represent everyone because I know we are all one people,” he told the NDP’s 40th convention rally in Greiggs on Sunday.

“I see brighter days ahead of us– as clear as day!  It can be done!” he said in the speech in which he said anyone needing a reminder of how badly the ruling Unity Labour Party had failed the nation should “ simply reflect on the poor performance of our economy over the time they have been in power”.

“Together, we can do it.  But to do so — to bring our country once more into the sunshine — we must remove the blight that has afflicted us for the last 17 years!” he said, referring to the ULP’s tenure in office, which began in March 2001.

The opposition leader used his speech to address “personally” the residents of Greiggs.

“You have a special and sacred place in NDP history.  Without you, the NDP might have been stillborn, for as Sir James Mitchell, the founding father of our great party tells it, people in Greiggs village saved his life during the NDP’s first election campaign, in 1979.  When henchmen of his political opponents came looking for him in Hadley Village to kill him, he came to Greiggs for safety, and the people of Greiggs hid him and stayed up all night singing and standing guard till morning came and the treacherous cowards vanished like the night. “

“Your country needs you,” he told the people of Greiggs.

“You are not being called upon today to save one life; this time we are calling on you to save the life of your country.  Help us to bring about the change that SVG desperately needs!  You can do it!”

The opposition leader rallied Vincentians to work together in the interest of the nation, saying that ‘divide and conquer’ politics destroys the nation.

“Fellow Vincentians, we can do great things when we work together for one another.  The divide and conquer politics practiced by the ULP may help the party to stay in power a little longer but, in the process, it kills the country,” Friday told supporters at its 40th convention rally in Greiggs.

“Therefore, I say to you, embrace your neighbour, no matter the party they voted for in the last election,” said Friday, who was delivering his second address as president of the NDP, a post that he took up in 2016.

“Don’t focus on the colour of the shirt they wore in the past, or perhaps even now,” he told the rally, where lively crowds of NDP supporters, clad in yellow – the party’s colour — waved yellow flags and blew yellow noise makers.

“Change can only come when they, too, change their minds about who would best represent them in government and provide for their future. Help them to see that it is not a matter of winner takes all, but a matter of all of us winning together, as we build a stronger economy and better communities for ourselves!”

Friday, however, said that the nation has put up with too much under the ULP administration of Prime Minister Ralph Gonsalves.

“We must remind Ralph and his crew — the out-dated encyclopaedia and his copy books — that time is up.  This country has endured enough.  It is not theirs to rape and plunder as they like, for as long as they like.  It is time for a new way, one in which we shape our own destiny working together for the benefit of all.

“Together, we can make this country better than it has ever been.  Instead of a laughing stock, we can be a shining light of the Caribbean.  We can be prosperous once more, respected once more, happy once more. But it must start with us. We must put aside differences—there will always be differences in a political party. We must unite in our prime objective to bring the New Democratic Party into government, for it is only by doing so that the vision of a brighter future of ‘One Nation, One People, One Vincy’ will become reality,” Friday said, quoting his mantra and the theme of the rally.