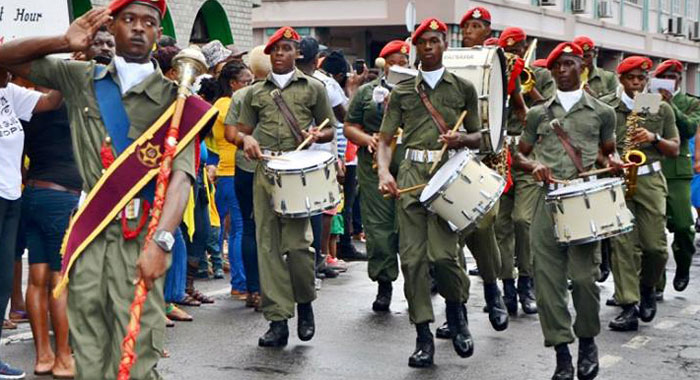 The St. Vincent and the Grenadines Cadet Force Band celebrated its 50th anniversary on Friday.

The late Lieutenant Reverend Allan Kirton started the SVGCF Band in 1968 as a Drum Corps, during the tenure of Captain Lennox John as Commandant of the St. Vincent Cadet Force.

The band’s first appearance was at the Queen’s Birthday Parade at Victoria Park, Kingstown on Saturday, June 8, 1968.

Over years, the range of instruments increased, gradually transforming the drum corps to a military marching band.

Among its achievements is winning the gold medal twice at the National Music Festival, and the signal Honour of playing for Her Majesty the Queen, on Oct. 27, 1985 at the medal investiture ceremony at Government House.

Activities will be held throughout the year to commemorate this historic milestone. Among the activities are: a variety concert on July 21, an awards ceremony in November, a Christmas concert, and the release of a commemorative coin.

In 1970, the corps acquired four more bugles and in 1972 two tenor drums that they were played by Esmond Weekes and the late Douglas Hamlet; two more tenor drums were acquired two years later.

In 1975, a donation from Humber College of five silver piston bugles enhanced the wind section and thus the repertoire was expanded slightly from simple bugle marches.

Women were recruited into the band in 1977.

The “great leap forward” came in the latter half of the 1978, when the corps of drums were transformed slowly into a full military band reaching it pinnacle in the 1980 under the guidance of Captain Alwayn Leacock, who made music education mandatory and thus give rise to many prominent tertiary qualified musicians such as Junior Sutherland — music teacher at the St. Vincent Grammar School, and head of JR Music Studio;  Captain Darrien Ollivierre — band officer of the SVGCF Band, and music teacher at the Intermediate High School; Dexter Bacchus,  Kemuel Spence — who attended the Royal Military school of music in Kneller Hall, the United Kingdom; Ezra Forde, a sound engineer; and Dexter Bacchus, music officer in the Ministry of Education

It has always been the dream of Captain Lennox John the then commandant to make the band a national showpiece; a sentiment expressed by successive commandants over the years.

“The journey has not been easy; they have had to rely on the generosity of the Kingstown Baptist church, the Marriaqua Secondary School and the Japanese for musical instruments,” said Lieutenant Colonel Dwight Lewis, who is commandant of the Cadet Force.