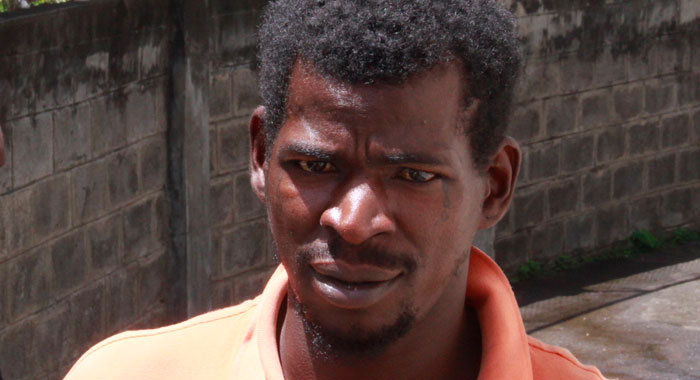 Jamarie Lowman’s luck ran out when a detective boarded the same van that he did. (iWN photo)

A Gibson Corner man has only the keen nose of a detective to blame for not completing a drug transaction that would have earned him the money he said he was going to use to fix his teeth.

The detective, Constable 831 Layne, who along with the man and other passengers boarded a public service omnibus on Saturday, ended up making an arrest after smelling cannabis.

Layne boarded the minivan at Little Tokyo, Kingstown, around 11:25 a.m. on Saturday and sat next to Jamarie Lowman who had a black knapsack on his lap.

She observed the smell of cannabis coming from the defendant.

The detective showed Lowman her police identification card and requested a search of his bag, to which he consented. The bag was found to contain a plant-like material resembling cannabis.

“Is weed; small smoke,” the defendant told the police officer when cautioned.

The detective asked the driver to drive the van to the Central Police Station in Kingstown.

The defendant was taken into custody and the marijuana, which was portioned in 28 transparent bags, amounted to 307 grammes (10.82 ounces).

When he appeared before Chief Magistrate Rechanne Browne Matthias on Monday, the 31-year-old defendant pleaded guilty to a charge of possession of the drug with intent to supply it to another.

His lawyer, Grant Connell, told the court that the Gibson Corner man is a father of two pre-schoolers.

He said his client, a ginger farmer, was “remorseful for having locally grown marijuana”.

Connell said that marijuana seems to have an orgasmic effect on police officers, causing them to act whenever it is detected.

The defendant had obtained the drug from a friend and was hoping to sell it to get money to go see a dentist, the lawyer said.

He said that if his client were to smile, the court would “see the manifestation of that”.

The defendant told the court that he needed to see a dentist because his teeth are dropping out.

The magistrate, however, told the defendant he could buy EC$5 stamps and visit a dentist at the Milton Cato Memorial Hospital or at a district clinic.

The defence counsel, in an apparently light-hearted tone, asked the magistrate if she would use the public dental health service.

The magistrate did not answer the question directly but said that the state-employed dentists are well trained and many of them also have private clinics.

The lawyer asked that a “small fine” be imposed on his client and that he be given some time to pay, adding that Lowman only had EC$55 on him.

The magistrate noted the man’s early guilty plea and that the quantity of marijuana was not especially large.

She, however, noted that it was packaged for resale.

She imposed a fine of EC$600 to be paid by July 5 or, in default, three months imprisonment.