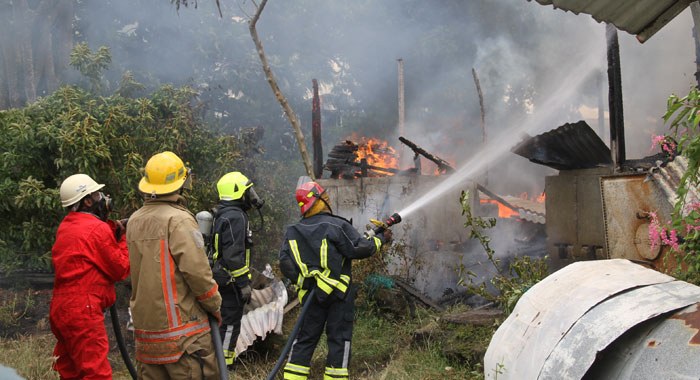 An Old Montrose man lost his home in a fire near Starlift Steel Orchestra’s pan yard in Old Montrose just after 11 a.m. on Wednesday.

A single fire truck responded to the fire, which gutted the wood and concrete two-bedroom house.   The building was engulfed in flames by the time fire fighters arrived in the community located just outside the capital.

The homeowner 63-year-old Enroy King, also known as “The Lion” or “Ras P”, told iWitness News that he left home around 7:30 that morning.

He said that around 11:30 a.m., he saw smoke in the air and was looking to see if it was his mother’s house but concluded it wasn’t.

King told iWitness News that he also noticed that the smoke was coming from a house below his mother’s and he expressed hope to someone that it was not his house.

“Then a little later two people came and call me and tell me my house on fire.”

He said the only appliance that was on in the house was the refrigerator.

“Nothing else was on in the house,” King said.

King, a mason, tile layer, and farmer, said that the house was a two-bedroom structure that he built in 1986.

“I lose every living thing you can think about: what I eat from (crockery), everything; my tools; my utensils. This is all that I have on my back,” he said, referring to his clothes.

“The only thing I am was to save was my life, which is very good, very great, very wonderful. But everything else is gone. My tools — might be approximately $1,000 in tools,” he said.

King told iWitness News that in the interim, he would stay with his sister at their mother’s home, which is located nearby.

“The fire has weakened my pocket in every respect. I‘ve got to start all over again. But, once there is life, there is hope. And you know the Lion is always here and very strong. “I can’t even fall or even think one moment [of falling],” King said.

He told iWitness News that people usually come to him for counsel.

“This is my turn now. I still have to be strong and prove to myself that I am strong and I am a leader. And that is how it actually goes,” he told iWitness News.

One reply on “Man loses home to fire (+Video)”