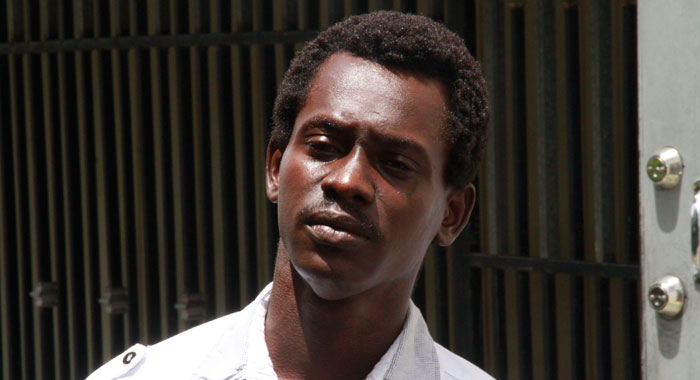 An Ottley Hall man who pleaded not guilty but offered no defence on two marijuana possession charges has been jailed for his crimes.

On Wednesday, Chief Magistrate Rechanne Browne Matthias found 27-year-old Dillon Bobb guilty of two charges that he had 9,080 grammes (20 pounds) and 123 grammes (4.3 ounces) of marijuana in his possession at Rose Place on Feb. 2.

Forde told the court that a party of Criminal Investigation Department and Special Patrol officers were conducting a door-to-door operation in pursuit of a suspect in Rose Place on the day in question.

He said that when police knocked on the door of a shanty, the defendant answered, after a while.

The detective said he saw a nylon sack under a bed inside the one-room, shanty, which measured about 10 feet by 10 feet.

Forde told the court that he reached into the shanty and pulled out the sack.

The sack was found to contain two parcels of compressed marijuana.

The detective said that his team continued the search and found a Jansport bag containing 123 grammes of cannabis.

Bobb told the police that this bag belonged to him.

Forde said that Bobb gave a caution statement when he was taken to the CID headquarters in Kingstown.

In the statement, the defendant said that he had been drinking and had fallen asleep under a veranda in Kingstown.

He said that a man he did not know woke him up and took him to the shanty.

Bobb said that the man told him he could sleep at the shanty, and threw the keys inside before leaving.

After Forde’s evidence in chief, Bobb told the court that he had no question to put to the detective, and maintained that stance after the chief magistrate gave him three opportunities to challenge the investigation.

Bobb had also had no question for Constable Douglas.

After hearing that Bobb had no questions for the investigator, Senior Prosecutor Adolphus Delplesche told the court that the Crown was closing its case.

Bobb told the court that he had nothing to say in his defence.

After he was found guilty, he also said he had nothing to say in mitigation, but asked if he would be granted bail.

The magistrate pointed out to the man that he had already been granted bail and that the trial had moved beyond that stage.

The prosecutor then asked Bobb if he was okay, and he said yes.

Delplesche asked the man if he was sure, and he said yes.

Bobb told the court that he is a fisherman and would pay a fine, if one is imposed.

He further said he had an uncle in the United States, who had promised to help him pay a fine.

Bobb said he would try to pay it.

However, the chief magistrate told Bobb that she was not convinced that he could pay the fine.

She, therefore, jailed Bobb for seven months for the larger amount of the drug and two weeks for the 123 grammes.