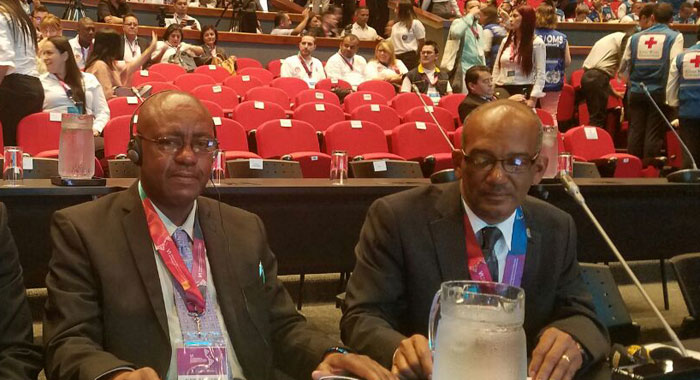 The government of St. Vincent and the Grenadines continues to pay special attention to disaster risk reduction given the vulnerability of the country to natural hazards.

It is against this backdrop that SVG is being represented at the Sixth Regional Platform for Disaster Risk Reduction (DRR) in the Americas, which got underway in Cartagena, Colombia, on Wednesday.

SVG is being represented by a three-member delegation led by Minister of National Mobilisation and Social Development, Frederick Stephenson. The other members of the delegation are Minister of Education St. Clair Jimmy Prince who left SVG on Wednesday to join the delegation, and Permanent Secretary in the Ministry of National Security, Godfred Pompey.

The government of Colombia in cooperation, with the United Nations Office for Disaster Risk Reduction, is hosting the platform.

It represents an opportunity for governments, the private sector, civil society and other actors in the Americas to exchange experiences regarding the implementation of the Regional Action Plan, agreed in March 2017 in Montreal, Canada, as a guide for the implementation of the Sendai Framework for Disaster Risk Reduction 2015-2030 in the Americas.

The main objective of the VI Regional Platform for Disaster Risk Reduction in the Americas is to discuss the way in which governments, ministers, civil society leaders, technical and scientific institutions, the private sector and the media could promote the application and measurement of the expected results of the Sendai Framework in the Americas. It is expected over 1,000 delegates, such as policy makers, professionals in various fields and experts in disaster risk management will attend the Platform.

The Regional Platform consists of an intergovernmental segment, technical sessions, parallel and special events where participants will be able to interact and discuss the implementation of the Sendai Framework, best practices and lessons learned. A key feature will be the High-Level segment where Ministers and other high-level authorities will prioritize the DRR agenda for the next two years in the Americas region.

The Regional Platform will also feature a marketplace, a photographic exhibit and the Ignite Stage, a place where DRR practitioners present innovative DRR tools and initiatives. The Regional Platform will also offer an opportunity for sub-regional intergovernmental groups and DRR stakeholders to interact and strengthen partnerships and share experiences on the road to meeting the Sendai Framework’s seven global targets.