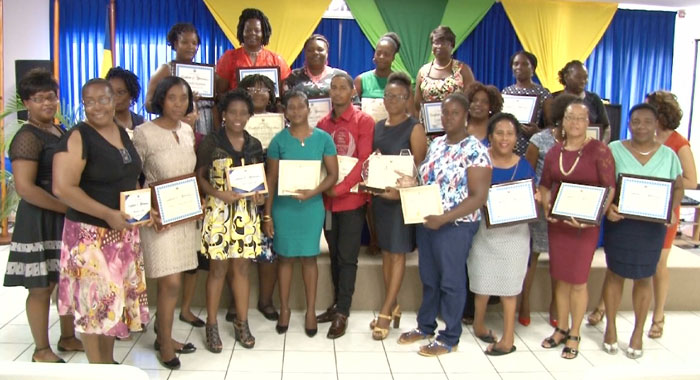 Awardees at the ceremony in Kingstown on Friday. (Photo: API)

The Early Childhood Department in the Ministry of Education has acknowledged parents, practitioners and institutions in the early childhood education sub-sector for their contributions.

This came at the Child Month 2018 prize giving ceremony on Friday in Kingstown.

“The closing of Child’s Month is the most appropriate time to recognize the important role that you early childhood educators play in the most critical learning stage of our children’s lives.” She noted that the fact that early childhood educators and practitioners show up for work early and leave late to ensure the safety of the children warrants them more appreciation from parents, the Ministry of Education and by all other stakeholders.

The Chief Education Officer also acknowledged the work that has been done in the early childhood sub-sector by private operators, churches, and non-governmental organisations.

“I also applaud the government’s move towards early childhood education, given that research suggests that the foundation of any nation rests on the quality and accessibility of early childhood care and development of all children.”

Neptune also applauded the Best Practices Award, one of the awards categories in this year’s prize giving ceremony.

“I applaud this gesture as many of our practitioners and educators demonstrate best practices even while we await the ratification of the early childhood learning standards.”

She said the NAECE will put measures in place to honour its commitment to reward eligible practitioners who are or will be enrolled at the St. Vincent and the Grenadines Community College, Division of Teacher Education or the University of the West Indies to pursue studies in Early Childhood Education as they seek to broaden their knowledge in this field.

Cambridge noted that although she came from a background of secondary education, Ballah was very supportive of her becoming involved in early childhood education.

The Senior Education Officer said the idea of recognising persons who made an indelible mark on the lives of the children didn’t just start with her, but began many years ago.

“It might not have been fine tuned to this level but it started many years ago and that is why I started off by recognizing Mrs. Judith Hull- Ballah.”

Cambridge said we must develop a culture of saying thank you because when people feel appreciated they feel a sense of self-worth and that is what underpins the Early Childhood Department’s thought of hosting a national awards ceremony at this level.

Cambridge, who spent the last decade in early childhood education and who will be leaving the sector soon. thanked the Ministry of Education for the opportunity to serve, noting that she has finished the course and would have done her best.

The three categories of awards were: Parents Award, Best Practices Award and Practitioners Award. The Parents Award went to the parents who not only care for their own children but that of the other children and are always supportive of the early childhood centre that their child’s attends, the Best Practices Award was given to the schools that demonstrate the best standards and the Practitioners Award went to the teachers who are dependable, responsible and are able to manage the early childhood centres in the absence of the owner.

This is the 3rd year that the Early Childhood Department within the Ministry of Education is hosting a prize giving ceremony to recognise the contributions of those in early childhood education. Awards and certificates were sponsored by businesses in Kingstown.

One reply on “Persons in early childhood education recognised”