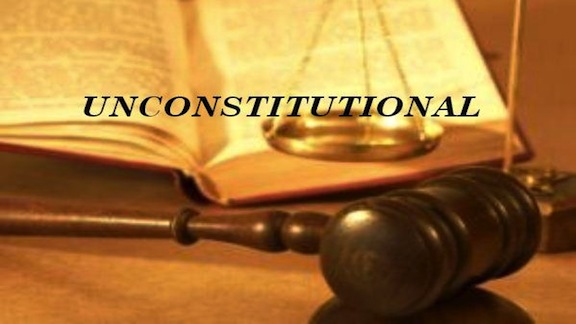 The Trinidad-based Caribbean Court of Justice (CCJ) has ruled that the section of the Offences Against the Person Act that provides for a mandatory sentence of death for murder in Barbados is unconstitutional.

The ruling came on Wednesday, as the court handed down judgments in a pair of unrelated death penalty cases from Barbados, for which the CCJ is the highest court.

The London-based Privy Council, the highest court for St. Vincent and the Grenadines, ruled several years ago that the mandatory death sentence for capital offences is unconstitutional.

The cases, Jabari Sensimania Nervais v The Queen and Dwayne Omar Severin v The Queen, were consolidated because both appeals challenged the murder convictions of each of the men and the constitutionality of the mandatory death sentence for murder in Barbados.

In addition, both men had their appeals against their convictions dismissed in the last judgments that Sir Dennis Byron will deliver as CCJ President as he will demit office next Tuesday.

Before examining the issues raised by the appeal, the CCJ considered the state of the mandatory death penalty in Barbados for murder and found that it was indisputable that the nation, through its actions, had acknowledged that it had an obligation to remove such mandatory sentence under section 2 of the Offences against the Person Act.

Barbados had also given undertakings to the CCJ and the Inter American Court of Human Rights to rectify the mandatory sentence which was reflected in the Barbados Privy Council’s consistent commutation of the mandatory death penalty.

The CCJ held that section 11 of the Constitution, which gives the right to protection of the law, was enforceable.

The CCJ found that the mandatory death penalty breached that right as it deprived a court of the opportunity to exercise the quintessential judicial function of tailoring the punishment to fit the crime.

Justice Anderson disagreed with the majority’s view and stated that the appeals should be allowed on the basis that the judicial monopoly on the power to sentence, which is protected by the separation of powers principle, is consistent with “ensuring respect for, and adherence to, the ongoing evolution in the protection of human rights”.

The CCJ ordered that the appellants be expeditiously brought before the Supreme Court for resentencing.

Nervais was convicted of the murder of Jason Barton and the mandatory sentence of death by hanging was imposed on him.

Baton was selling from a booth when an alarm was raised that caused him, and the people gathered around, to run away.

Gunshots were fired by a group of men and Barton was struck by a bullet and died.

Later, Nervais was arrested and charged with Barton’s murder after he made oral statements and a written confession to a police officer.

The Court of Appeal in Barbados dismissed his appeal against conviction and affirmed his sentence.

Nervais raised a number of grounds of appeal before the CCJ including addressing the trial judge’s alleged misstep in telling the jury that a witness’ evidence corroborated the disputed written statement.

As his second ground of appeal, Nervais contended that the trial judge usurped the fact-finding function of the jury because she determined a fact that was in issue, which undermined his alibi.

However, in these, and three other grounds raised by Nervais, the court was satisfied that the judge did not usurp the function of the jury, there was no error or misdirection, and the necessary procedures were followed by the police.

In the other case, Severin was convicted before a judge and jury for the murder of Virgil Barton in St. Phillip.

The prosecution relied heavily on the evidence of Barton’s nephew, Judd Barton, who testified that he saw two men shoot at the deceased.

Barton’s nephew managed to escape but not before recognising one of the shooters, whom he had seen on two previous occasions.

While investigating Judd Barton’s suspicions, the police conducted a search of Severin’s residence and found a Taurus semi-automatic gun along with 31 9mm rounds in his bedroom. Forensic testing confirmed that three of 14 cartridges retrieved from the murder scene were fired from that gun.

In his appeal to the CCJ, Severin challenged the reliability of Barton’s evidence, the fairness of the informal identification parade, and the instructions given by the judge to the jury at the trial.

After considering Barton’s evidence, the CCJ expressed its satisfaction that the shooter’s features would have been “fresh” in his mind.

The CCJ determined that the judge placed a balanced case before the jury, although there was the view that the judge could have been clearer in his lengthy instructions to them.

The Bench of the CCJ, comprising the Byron and Justices Saunders, Wit, Hayton, Anderson, Rajnauth-Lee and Barrow, heard the appeals together on Jan. 25, 2018.