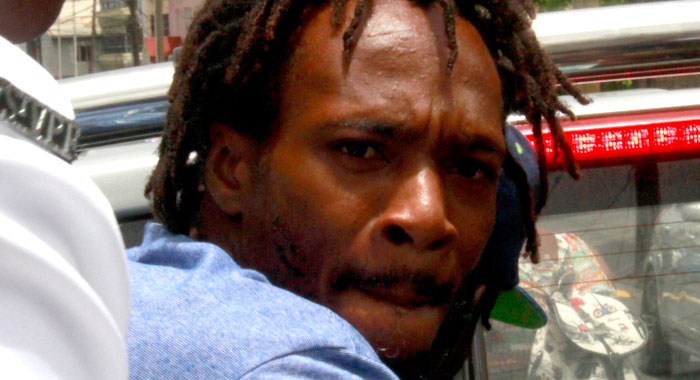 Daniel Phillips will spend 12 months in jail for his crime. (iWN photo)

A man who stole a vendor’s handbag and spent the EC$1,460 she had inside found out on Monday that the leniency that comes with an early guilty plea does not necessarily mean avoiding jail.

Phillips pleaded guilty at the Kingstown Magistrate’s Court to a charge that, on June 23, at Kingstown, he stole a black handbag belonging to Alselma Joe, containing a purse, a driver’s license card, a national ID card and EC$1,460 in cash.

The court heard that Joe sells at the Windward Bus Terminal (Little Tokyo).

Last Saturday, she was at her regular location when Phillips and two other men approached her to buy rum around 9 a.m.

After selling the men the liquor, the woman asked them to help her to pack up her bar and they agreed.

Joe left with Phillips and another of the men to go to her vehicle, where she left the handbag.

She returned to the vehicle a few minutes later and found that the bag and Phillips were gone.

The bag was later recovered in a restaurant in Kingstown, but the cash was missing.

Phillips was apprehended and admitted to police that he had stolen the bag and its contents, but offered no formal statement.

In mitigation, the defendant, who said he is a labourer and also helps to take care of his brother-in-law’s pigs, asked to be allowed to pay back the money.

“Where is the money?” the magistrate asked.

“The money dead and you want this court to give you a chance to pay it back? It’s one place you are going today,” Burnett said, signalling his intention to jail the man.

“You are a dishonest man,” he said.

At this point, Phillips said that he thought that the court would have been lenient because of his early guilty plea.

The magistrate, however, said that the leniency he would give in that case relates to the length, rather than type of sentence.

“She is working in the market to survive. Look at you — a young man like you. You will go to prison for 12 months. This is the level of lawlessness and ignorance we have in the country. This poor woman is trying to survive. Look at what you do to her and telling me about leniency,” Burnett said.