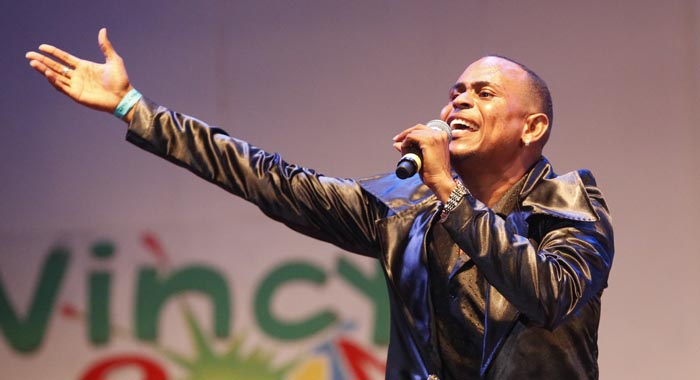 With Fire Empress out of the competition, will “Man Zangie” return to SVG’s calypso dominance this year? He has to earn a pick in tonight’ semis. (Photo: Oris Robinson)

The Calypso Semi finals on Friday night are being billed as a “battle royal” between the veterans and the young‘uns.

And with the reigning monarch, Lornette “Fya Empress” Nedd not defending her crown this year, 10 of the semi-finalists will be selected to advance to the July 8 finals.

Of the 22 semi-finalists, exactly 50 per cent have won a crown in the art form before, some at the national level.

“And I am not saying that we have 11 former National Calypso Monarchs. We actually had seven and we have four other monarchs,” President of the Calypsonians Association, Earl “Caba” Bennett told a recent press conference.

The other monarchs in the line up are reigning Ragga Soca Monarch, Hance John, former Ragga Soca Monarch Chewalee Johnson, Reigning Queen of Calypso, Joanna “Nubian Princess” Christopher, and Shaunelle Mc Kenzie, who has won the Junbiro Calypso crown eight times — more than any other artistes.

The reserves are Glenford “Azarah” Charles and Sherikah Richards.

“It means that we have a battle royal come the 29th of June,” Bennett told the CDC press conference.

“Maybe Fantastic Friday would turn out to be phenomenal and fantabulous Friday. However you put it, you are in for a spectacular show. Imagine those 22 persons going after each other for exactly 50 per cent of the persons would graduate to up stage as they go on tour at the Victoria Park,” he said, punning on the names of the calypso tents represented in the finals.

The reigning monarch will not defend her crown because of health reasons.

“And we will miss her in the competition and we wish her all the best and a speedy recovery,” Bennett said of Fya Empress.

Fya Empress won the crown last year with “Guilty”, a song about a woman meeting her husband in bed with another man, and “Hope is Alive”.

The guest artistes at Friday’s show will be Cornelius “Poorsah” Williams and Alston “Becket” Cyrus.

“So you have more reasons than one to come to Victoria Park. We are expecting a bumper crowd…” Bennett said.