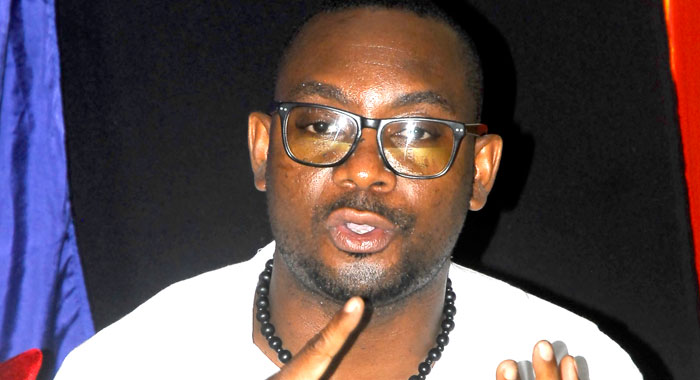 Marvin Fraser has been appointed to act as head of the SVGFF. (Robertson S. Henry file photo)

The new head of the St. Vincent and the Grenadines Football Federation (SVGFF) was a member of the executive in 2014, when the World Cup ticket saga occurred that led to the two-year ban on Venold Coombs, which FIFA announced on Tuesday.

On Wednesday, however, Marvin Fraser said while he and other executive members authorised then president Venold Coombs to handle the ticket matter, they don’t know much about what transpired.

On Tuesday, FIFA’s ethics committee banned Coombs for two years and fined him US$40,000 over a ticket scam at the 2014 World Cup.

After the ban was announced, the SVGFF executive elevated Fraser from second vice-president to acting president.

He agreed to fill the post after the first vice-president, Otashie Spring, declined the elevation provided for in the SVGFF’s constitution.

Fraser told a press conference in Kingstown on Wednesday that he, along with

The persons remaining from the 2014 executive, are  Dwight Roberts, Otnell Douglas and Dominic Stowe.

He, however, said that the executive could not be blamed for the action of the former president, explaining that the executive had decided to leave the issue of the World Cup tickets in the hands of Coombs and then general secretary, Trevor Huggins.

Fraser said that one of the reasons was because FIFA had queried the transfer of funds among SVGFF accounts at a bank.

Further, the federation’s accounts had been frozen because of a court case that a travel agency had brought against the federation.

“We decided that with the World Cup tickets and this pending case going on that the tickets will be sold. We will get the tickets and we will sell them,” Fraser said, adding that that was an executive decision.

“The issue came about because the executive at the time allowed that situation to be dealt with by the president and by the general secretary at the time.

“Other executive members knew that the World Cup tickets were being sold but we did not get involved in how much they would be sold for, who would sell them, how many tickets the president would be getting as a committee member.

“We didn’t get into that issue. That is why FIFA did not do anything else but deal with the persons they deal with,” Fraser said.

He said that the tickets from the federation were sold and the monies used to send the national club and under-20 teams to Cuba.

“So the executive knew that those ticket monies what they were going to be used for. One of the things that FIFA has zoomed in on, and if you notice that they have decided to speak about is conflict of interest and so on, based on the tickets that Mr. Coombs sold for [himself] as a committee member. That information, he dealt with that. That is his personal thing and that is why, I believe, that case went the way it did.”

In announcing the ban on Tuesday, FIFA said its investigatory chamber had analysed allegations that Coombs had sold tickets purchased by the SVGFF and by him personally, in his capacity as a FIFA standing committee member, for a profiteering mark-up.

The adjudicatory chamber found Mr Coombs guilty of having violated the bribery and corruption, conflicts of interest and loyalty articles of the FIFA Code of Ethics.

But Fraser said that his hands are clean amidst the saga.

“… When I sat with FIFA, I couldn’t answer a lot of the questions because I did not know about the committee tickets and those things at the time. All I know is that the federation agreed that based on what was coming that we had some tickets coming and we could sell them and we gave the mandate to have those tickets sold.

“In fact, if you look at a lot of the meetings, minutes pertaining to discussions on the tickets sales and stuff, I was absent from those meetings.”

He, however, said that he was not trying to distance himself from the decision of the executive.

“I will never pull myself out, never, and say I was not part o the executive because I was part of the executive that stated that we should sell the World Cup tickets. How much they were sold for, how many were sold, I really can’t tell you, because I don’t know,” Fraser said.