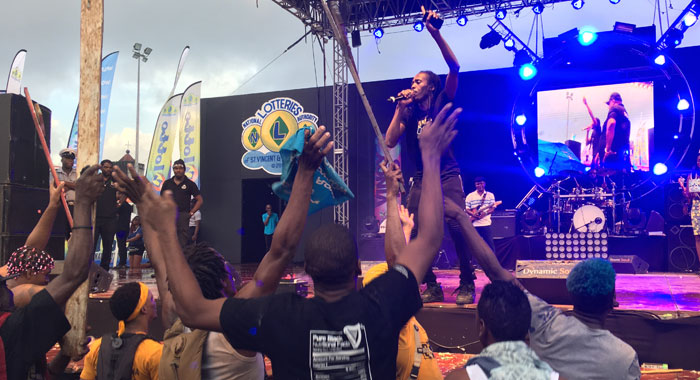 The artiste have won secured a chance to compete against Deloy “Fireman” Hooper. (iWN file photo)

Delroy “Fireman” Hooper Saturday night put on a performance that showed, yet again, why he is one of the most loved of the nation’s soca artistes.

Skinny Fabulous, who returned to the competition after a two-year hiatus, was forced into second place after his high-tech presentation, which included an actor leaving the stage in a jetpack.

It was not clear if the fact that the jetpack landing in the buffer area between the media and the stage immediately after its initial take-off was intentional.

However, the development gave some persons a scare and sent some media workers scampering, before the jetpack took off again and flew above, and in the direction of the back of the stage.

Fireman’s presentation, on the other hand, went back to basics, and was reminiscent of his “Soca Baptist” song of more than a decade ago, that helped to propel him and the Roses Crew to national acclaim in presentations that marked the transition of Vincy Soca to its current iteration.

His on-stage props Saturday night included actors wearing religious garbs of the Spiritual Baptist faith, as well as the ringing of bells and the chanting that accompanies worship within that denomination.

Essentially, Fireman’s song was about “burning out” “hypocrites and bad mind” by showing them “the sign of the cross”.

The presentation also included the release of two white pigeons.

And while many soca lovers lauded Fireman’s presentation, some social media commentators felt that it had gone too far and had ventured into sacrilegious.

One does not have to be a dedicated and close follower of Soca Monarch competition to know on show night that an artiste is highly anticipated and would have a major impact.

One only needs to listen to or otherwise observe the reaction of the crowd.

And as soon as challenger number 10, Johnroy “Mad King” Haywood, had completed his rendition of “Water Bubble”, wooden crosses of various sizes began to emerge among the crowd.

The excitement and energy continued throughout Fireman’s presentation and lasted until the end of the show over an hour later.

Speaking to reporters after his crowning after 6 a.m. Sunday at the end of a show that lasted more than nine hours amidst several moderate downpours, Fireman said:

He said that his inspiration for the song came from his spirituality.

Fireman said he is never surprised by the reaction of the crowd, some members of who continued to chant in front of the staff several minutes after the announcement of the results and the artiste’s crowning.

“They love me, I love them; because I love them and they love me. Because they make me; without them, I am nobody,” said the artiste, who is originally from North Leeward but is now based in North Windward.

Asked to comment on the fact that he had defeated Skinny using a low-tech presentation, while his challenger had gone for a high-tech performance, Fireman said:

“I’ve defeated him before with all the high-tech stuff like jet packs and stuff but that’s not my concern. I always try to stay relevant when it comes to my music, so I sing about ‘amen’ and a cross. You don’t need anything else.”

Skinny was second with his presentation of “Soca Defenders”, which drew heavily from the Marvel movies series, and saw actors on stage in Hulk, Spiderman, Iron Man and costumes from other characters in the series.

The presentation also drew heavily on “Black Panther”, the Hollywood blockbuster released earlier this year, which was hugely popular, especially among black audiences.

Fireman had said previously that he hopes to win at least 15 soca monarch crowns before calling it quits.

And he still intends to do that.

“Yes, but it doesn’t mean it’s next year and the next year. I could stay away for a while, but I hate to stay away because of my fans.”

He thanked his team, “Team Fire”, Jean Johnny-Findlay and “all the brothers and sisters who assisted me every year”, including among them Flow, Hairoun, and Karbon Jamz — his producer.

“That’s the song,” he said when asked about this.

“Now, these things come with experience. People want to go on stage and talk. No, no, no. Competition is about singing your song. It don’t matter what you want to talk and what you want to do. Fimba went up and he sing the same way. He didn’t do anything,” said the artiste who told reporters that his next is “home”.

There was a tie for the third position, with 2016 Monarch, Shane “Hypa 4000” Husbands’ not being able to prove that he is indeed “Top Man” ahead of Antonio “Small Circle” Edwards’ “Egg Plant”.