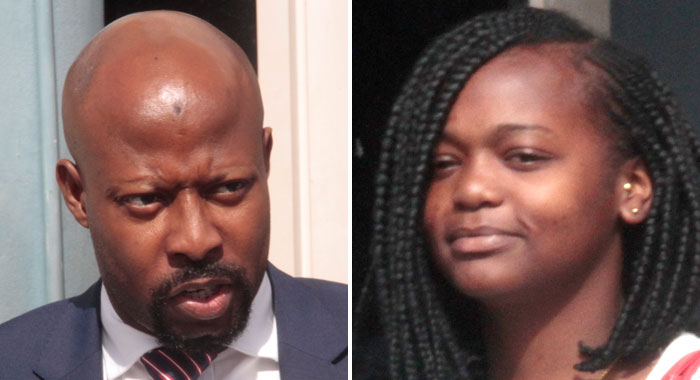 “But Vincentians don’t always speak the same,” Sakaina John, the Community College student who was injured during an altercation in Paul’s Avenue earlier this year responded.

She was at the time being cross-examined by defence counsel Carlos James on Friday at the Kingstown Magistrate’s court.

The lawyer is representing Chantea James, who is charged with the March 28 wounding of John in Paul’s Avenue.

The lawyer’s question about whether John had studied English came as he questioned her about her use of the word “approach” in a statement she gave to police about the incident.

In her statement to police, John had said that she “approached” the defendant.

But during cross examination, she said that she did not approach the defendant.

“I had to pass,” she said, triggering the question from defence counsel about whether she attends the Community College and if she studied English in school.

John’s case is essentially that James attacked her as she (John) and her friend, Jézell Prescott, were walking in Paul Avenue on the way to Stony Ground about 12:45 p.m. on March 28.

The virtual complainant told the court that she had ignored James when she and some of her friends had come to the Community College and had tried to engage her in a conversation on March 21.

She said she and James had had an “altercation” on the social media platform Instagram, after James had sent her a follow request.

John told the court that on March 28, she saw James standing on the sidewalk outside Caribbean Reference Laboratory.

James was holding a baby and a book bag when she first saw her she said.

She said James later placed the baby to sit on the edge of a concrete flowerpot on the sidewalk.

John said that James was staring at her and mumbling something so she had asked James what she was saying and had further told the defendant not to interfere with her.

She said that as she turned to leave, James removed the knife, which was wrapped in a black cloth, from her bag, and began attacking her, saying, “Girl! Girl!”

She said that at first, there was no tussle between she and James.

Asked if she had had cause to touch James, John told the court, “Yes, when I received the stab on my lip.”

She further denied hitting James first, adding that she had been angry because of their online altercation, “but not enough to pick a fight.

“I did not go and look for Chantea. She came for me. Me and my friend … were going to my mother’s, minding our own business, when we happened to meet up on her,” John told the court.

She said she did not have time to back away from James when she saw the knife.

Asked why she did not try to leave after being injured, John told the court, “I been done start to feel faint. I had lost a lot of blood.”

John said that after slitting her lips, James was hesitating before cutting her in her face and head.

She said she was able to wrest the knife from James but sustained cuts on her left fingers because she had grabbed the blade of the knife.

“Did you try to leave?” the lawyer asked.

“When me whole body done shut down?” John said, in the vernacular, before adding, “My whole body had already shut down.”

She said that she did not run away from the scene because, “I was shocked. I was scared.”

The trial continues on July 24.

7 replies on “‘Did you study English?’ lawyer asks college student”