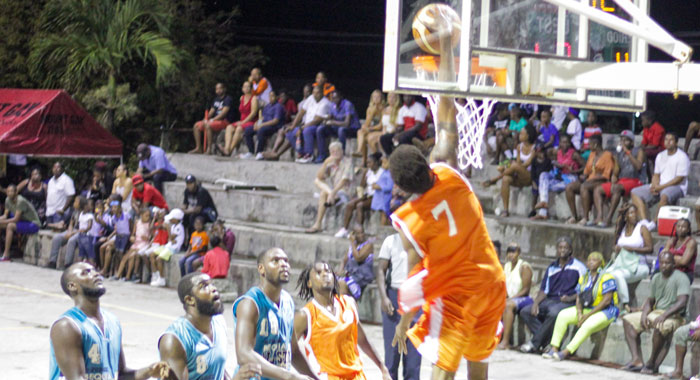 Minister of Sports, Cecil Ces McKie has encouraged Bequia basketballers to reach for the stars.

McKie highlighted the achievements of the Bequia Basketball Association and congratulated the group for the hard work done.

He acknowledged the high levels reached by the Bequia players in the secondary school competition, and said he was pleased to hear of the visiting team Hope & Hope coming from the United States later in August, who will benefit with ease of travel from entry to St. Vincent via the Argyle International Airport.

The minister promised he would look into the repairs to the facility.

Leader of the Opposition Godwin Friday, who is also Parliamentary Representative for the Northern Grenadines, also encouraged the players.

He spoke of his admiration for the incredible dedication of the President of the BBA, Sabrina Mitchell and her executive committee, and the sacrifices made to pull off a tournament for 20 years running, creating a wonderful event for the community.

Friday said persons in government and persons of influence need to do right by the young people, who are giving a lot and need that partnership and support.

He spoke of the importance of the event for the entire Bequia community and remembered the first time he spoke at an opening of basketball over 13 years ago. He added that many a sport organisation could take a page from Bequia Basketball, as many of the other sporting organisations have, unfortunately, fallen in recent years from their positions of prominence he remembers, when he was in school in Bequia.

The opposition leader also highlighted the many players who have benefitted from basketball scholarships, and wished the players a successful and injury-free competition.

Karel Bramble spoke on behalf of the national federation, thanking the president for her years of service and also the exemplary service given on a national level, serving as manager of the SVG Senior Men’s National Team. He also highlighted the exciting secondary school competition finals, which took place in Bequia, with the two Bequia high schools.

Director of Sports, Nelson Hillocks, also spoke of his unwavering support of the association, and applauded the continued development of the Bequia Association, which he said he always holds as an example to any sport organisation in SVG.

Hillocks commented that he gladly accepted the invitation to attend that was extended over a month before.

Sir James Mitchell, former prime minister of St. Vincent and the Grenadines, closed the opening remarks by paying homage to Wendell Ollivierre who built the very same hard court way back in the late 80’s, and thanked all the players and persons involved for the past 20 years.

He also congratulated Ms Mitchell for her sacrifice and the great lengths to which she goes to ensure basketball’s success.

The opening evening was well attended and persons of all ages came out to celebrate the 20 years.

There was some inclement weather, but the event ended with an exhibition match between the visiting Arnos Vale Heat Seekers, who were defeated by the Bequia United Team 65 to 53.