Legalising recreational ganja still off the table in SVG 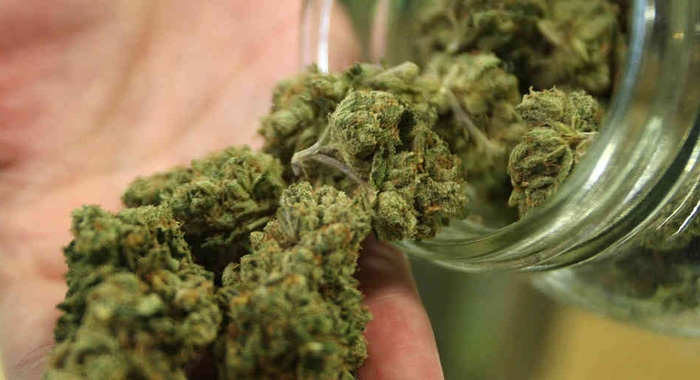 Prime Minister Ralph Gonsalves says his government is not prepared to legalise marijuana for recreational use just yet. (Internet photo)

The Ralph Gonsalves government will amend the laws of St. Vincent and the Grenadines to decriminalise marijuana use for medicinal and religious purposes.

However, recreational users of the plant will have to depend on “police tolerance”, if they are caught with smaller quantities.

Gonsalves restated the position of his government during an interview on Thursday on the sidelines of an event in Chauncey to rename the South Leeward Highway in honour of late former president of South Africa, Nelson Mandela, an internationally acclaimed freedom fighter.

The Unity Labour Party administration in Kingstown remains opposed to decriminalising small quantities of marijuana for recreational use notwithstanding the suggestion of the CARICOM Marijuana Commission that the plant be legalised.

Commenting on the commission’s report, which was presented to CARICOM leaders at their summit in Jamaica earlier this year, Gonsalves said that the report “is an exhaustive one” on which commissioner did a lot of work, for which he commended them.

“The area of greatest weakness of the report, clearly, despite its immense strengths, is that there is an insufficiency of details about the economic aspects of it and some problems which are going to be met through a set of banking regulations and so on and forth. But, that’s in a sense, by the way,” the prime minister said.

Gonsalves said the report has to be read “both general and specific”.

“Because, as you know, they have said that each country would proceed in accordance with its own set of realities. And the general case which they have made for the decriminalisation for the purposes of recreation, they have made a good case but it doesn’t mean that is the way you have to proceed by doing that first.”

Gonsalves, who had triggered what became the CARICOM Marijuana Commission, said that, to his government, the most important thing for us in relation to “the marijuana industry” is the word “industry”.

“To create wealth and for persons to make a good living, a sustainable living and to create jobs,” he explained.

“And it’s our judgement that in the specific case of St. Vincent and the Grenadines, the best way to do that is first of all by addressing the question of the decriminalising, legalising for the purposes of the medical cannabis industry and to address, not just to decriminalise but to legalise, for persons of religious persuasions who want to use it in registered tabernacles.”

The CARICOM Marijuana Commission is opposed to the decriminalisation of marijuana for medicinal purposes only.

The prime minister said that in SVG, the police, generally speaking, over the last 10 years, have been very tolerant.

He, however, said that this “tolerance” would not be enshrined in law.

“You can’t legislate tolerance,” he said, adding that the law would not provide for persons to have certain quantities and not be arrested.

He also said that possession of small quantities would not become a ticketable offence, as some persons had suggested.

“I am yet to understand fully how you can say to someone, as in Jamaica, you can have two ounces in your possession. The police walking around with a scale? Laws have to be sensible,” said Gonsalves, who is also a lawyer and Minister of Justice.

“I believe that if you decriminalise and with ounces, you are likely to be creating problems between the police and the citizens,” he said, asking, in illustration, what happens if the police and someone disagree about whether a small portion of marijuana is in keeping with the weight that the law might provide for.

The CARICOM report had also pointed to Jamaica as an example of a Caribbean nation where there is de facto decriminalisation.

But Gonsalves noted economic consideration in such a context.

“The thing I want to say is this: Jamaica spent a lot of time and effort on the decriminalisation front. They haven’t exported one ounce of ganga yet. Right now in Jamaica, more ganja is grown illegally for the legal market and the local market in Jamaica.

“Is nearly 3 million people you have. Let’s say you have one and a half million adults who could smoke it, that’s a sizeable market. To get a licence to grow it is like pulling teeth without anaesthesia — it’s a very difficult thing, so that persons are still growing it illegally for what is a semi-legal market.”

The prime minister, however, noted that the change in law in Jamaica is also focused on avoiding giving criminal records to young people for possession of small amounts of marijuana.

He said that in SVG, under the Rehabilitation of Offenders Act, his government would consider reducing the five-year wait before convictions for small quantities of marijuana is considered spent.

“…we would have to shorten that to just do away with that after a year, or whatever it is,” he said.

Regarding the finding of the report that in some jurisdictions, courts hand down harsher penalties for marijuana possession than for more serious crimes, such as wounding, Gonsalves said:

“I don’t know if that happens in our jurisdiction, where people are given fines and forms of punishment for simple possession of marijuana or even possession with intent to supply, where the amount involves a very small quantity…

“For the last two Independence [anniversary celebrations], I asked for a report from the Prisons for persons who are inside there, serving a jail term for a small quantity of ganja so that I can take them to the committee of mercy to see whether they could be released. And I couldn’t find one person, none one single person.”