Switching to CCJ is about ‘social equality’ — Justice Saunders 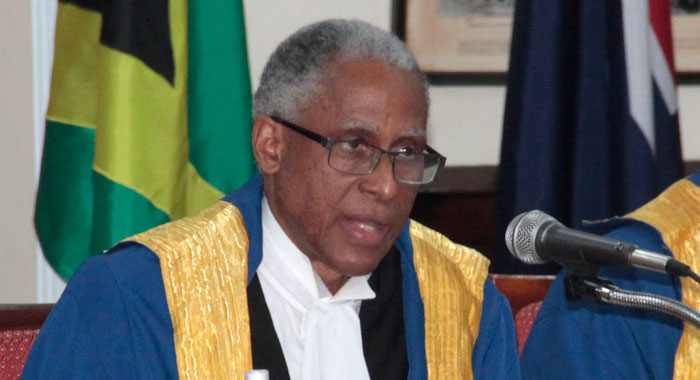 The newly installed President of the Caribbean Court of Justice, Justice Adrian Saunders, says that replacing the London-based Privy Council with his court is about social equality for CARICOM nationals.

He cited statistics to show that the Privy Council, which remains the highest court for several CARICOM nations, has upheld most non-death penalty decisions of the Eastern Caribbean Court of Appeal.

Speaking on Friday at the special sitting of the CCJ in his home country, St. Vincent and the Grenadines, which is not a member of the court, Saunders said that most losing litigants tend to sing songs of woe about the court before which they lost.

“But, what is the reality?” he said, adding that the Eastern Caribbean Court of Appeal is, per capita, one of the busiest courts of appeal in the region.

In SVG, that court sits three times a year, handling about 60 cases each year, he said, noting that over the last 30 years, the court would have handled about 1,800 cases.

Of those, only 21 were appealed further to the Privy Council.

“How is it that only 12 litigants who were dissatisfied with the decision of the Court of Appeal chose to appeal the decision?

“The main reason is the massive cost involved in accessing a court sited in London.

“The cold reality is that unless you commit murder, when the state and or human rights bodies are likely to provide you with legal aid, an ordinary litigant who wishes to appeal a judgement of the court of appeal is simply unable to access further justice. Only the state or the well off can do so. And the statistics bear this out,” Saunders said.

He said that of the 12 non-death penalty cases that reached the Privy Council, the Court of Appeal was reversed four times.

“I don’t want to say anymore on this issue, except to say that it is my fervent hope that in the months ahead, we in St. Vincent and the Grenadines will reflect on this issue of the continued retention of the British Privy Council to hear our final appeals.

“It is my further hope that as we do so, that light will prevail over heat, that fact will prevail over sentiment and that sober reality will prevail over partisanship. As far as I am concerned, what is at stake here is not a political question, it is not a constitutional diadem; it is a social issue of profound importance. This is a matter that has to do with social equality.

“One can put any spin one wishes on it, at the end of the day, we must see it for what it is. It is an issue of affording to the ordinary man and woman the same level of access to the highest level of justice as is currently enjoyed by those who are well off. I say no more on this.” Saunders said.

Saunders said that it is only natural that Caribbean nationals should  have the final say in the interpretation of the laws passed by their parliaments.

“And ambitious political activists can aspire to be prime minister of St. Vincent and the Grenadines. But a serious, dedicated judge, cannot today aspire to be a member of her apex court, because that is a role we have chosen to reserve for British judges,” he said.

In a 2009 referendum, the Vincentian electorate rejected proposed changes to the nation’s constitution, which included replacing the Privy Council with the CCJ.

Prime Minster Ralph Gonsalves has said that an advisory opinion of the Eastern Caribbean Court of Appeals has indicated that a referendum is not needed to make a change.

Rather, the government would have to secure a two-thirds majority in Parliament to replace the Privy Council with the CCJ.

Gonsalves said at Friday’s event that he would introduce such a law if the opposition would support it.

The main opposition New Democratic Party, which holds seven of the 15 seats in parliament, is pro-Privy Council.