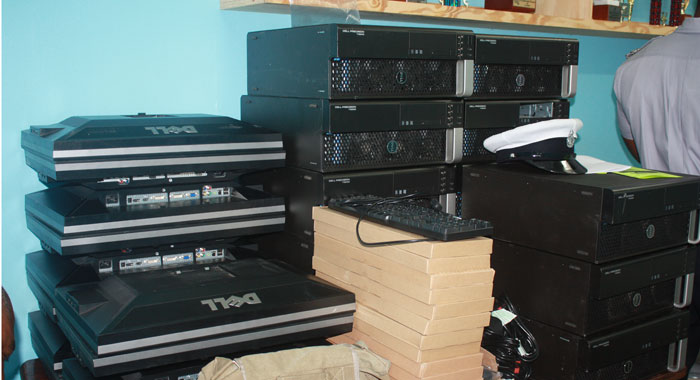 The equipment was handed over at a ceremony hosted at the Central Police Station, Kingstown.

Chair of the SVG Diaspora Committee, Sherrill-Ann Mason-Haywood, described the initiative as the result of the successful collaboration of ideas.

She said the committee was thrilled to be the facilitators of such an initiative and credited Garnes Byron, the committee’s trustee, for discovering the need through a casual conversation with Inspector Kimm Dougan, which ultimately paved the way for the computers to be donated.

She also disclosed that the SVG Diaspora Committee is looking forward to fostering a successful partnership with the RSVPF, and to actively contribute to the further modernisation of the constabulary.

Commissioner of Police (COP), Colin John, thanked the SVG Diaspora Committee for the donation and praised Byron for the role he played in ensuring that the computers were donated.

The commissioner pointed out, that despite some of the negative sentiments expressed by the public about the constabulary from time to time, the polcie forge is still determined to develop its resources, and remains unwavering in its efforts stamp out internal corruption and to maintain law and order in St. Vincent and the Grenadines.

John stated that the computers were a timely donation, since the organisation has been taking steps towards computerising the police force, and making it more efficient.

He said the computers will be utilised solely for the purpose for which they were donated and that policies will be put in place to ensure their proper upkeep.

Mayfern Mayers-Oliver spoke on behalf of Byron, saying that although he Byron lives in New York, his heart remains in St. Vincent because he loves his country so much and would do anything to assist, wherever he can.

Assistant Superintendent of Police Trevor Bailey, while giving the vote of thanks, expressed sincere gratitude and appreciation to the committee for their contribution to the RSVPF, and assured the group that the constabulary does not run a “game shop,” and that the computers would be used solely to assist the organisation.

The SVG Diaspora Committee of New York Inc. is a non-profit organisation incorporated in the state of New York to provide opportunities for Vincentians at home and abroad to reflect and act effectively on vital issues and opportunities facing SVG and its Diaspora in the United States.