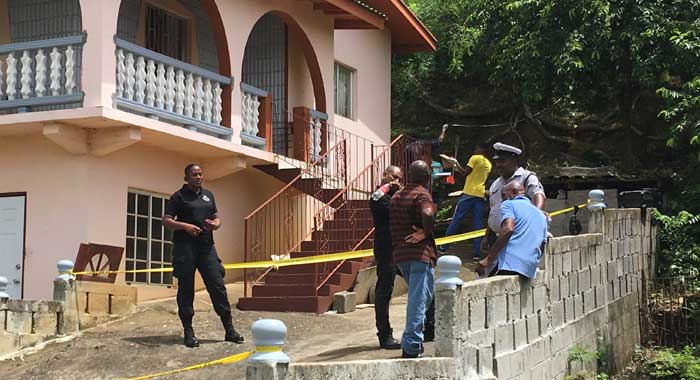 The scene in Diamond Village where the body was found Monday morning. (iWN photo)

A Diamond Village man who woke up Monday morning to roast breadfruit for his family had to shelve those plans after he saw a body near the fireplace in his backyard.

The dead man, whose body had severe chop wounds, some of which almost severed his limbs, is being treated as the second homicide in St. Vincent and the Grenadines on the weekend.

The death brings to 18 the number of killings recorded in the country so far this year.

“This morning, when I got up and looked outside, about 20 or so minutes past 6, because I was about to roast some breadfruit, when I looked towards the fireside, I saw what appeared to be a dead body,” retired educator Sheldon Govia told iWitness News just outside his gate after police had removed the body.

Police said that the body has been identified as William Bushay/James Gould, also known as “Bush”, originally of Vermont.

He is said to have been living in San Souci, a neighbouring South Central Windward village.

“He was lying on his back with his hand on his chest; not moving. So I just closed back the kitchen window the same time and called the police immediately.”

Govia told iWitness News that he heard “no sound or voices or anything like that” overnight outside his home that would have alerted him to the presence of the dead man in his backyard.

He said he went to bed after midnight Sunday.

“But they were having an after-football party so they had the music and thing over there too,” said Govia, whose house is located close to the playing field, where the recreational events took place on Sunday.

He said that while he did not know the dead man personally, he had seen him around the South Central Windward village.

“Just seeing him passing on the road,” he told iWitness News.

Govia had no idea whether the man was actually killed outside the house where the body was found.

“I can’t say. And they were having thing over there, so with all the sounding I didn’t hear any voices or anything like that,” he said, referring to the entertainment event at the playing field.

Some onlookers speculated on whether the man’s body has slid down the embankment behind Gouveia’s house and had come to rest in his property.

Police have not commented on this theory, however, the speculation among onlookers was further fuelled by the fact that detectives, as part of their investigations at the scene, had measured the distance between the body and points along the slope.

Govia said that having woken up to such a scene in his yard is unsettling for his family.

“Looking at it, it was a bit traumatising, especially for my wife when I told her, but after that just keep my cool.

“It’s very unfortunate. I have been living at this house since 1989 and this is the first time that we are seeing something like this: getting up and just seeing a dead body in the backyard.”

There were reports that the limbs had been hacked off the body.

Police, however, told iWitness News that this was not the case. They said that the body had extensive wounds to the limbs, but they were still attached to the body.

“I didn’t look closely at the body. I understand it had some chops. When they picked up the body, one the hands were chopped off — hanging by the skin.”

Regarding his continued occupancy of his home, Govia told iWitness News:

“I am not scared of anything. I believe in Yahweh and Yahweh is the one that protects me.”

Some residents of Diamonds are asking questions about whether the man’s brutal death might be linked to an altercation that he is said to have had with a female villager recently.

However, police have not commented on this nor have they offered any theories about the killing.

Meanwhile, police are also investigating the murder of Elizabeth “Bay Bay” Bacchus, who died after being shot in the back at a shop in Rockies around 3 a.m. Saturday.

Bacchus’s death brings to two the number of persons shot and killed in the East Kingstown community in less than two weeks.

Her death follows that of Murando Williams, 36, of Frenches, who was pronounced dead at the Milton Cato Memorial Hospital, to where he was rushed after being shot in Rockies.

Police have issued no statement on Bacchus’ death, but some persons have speculated that it might be connected to a crime that was reportedly committed against one of her relatives recently.