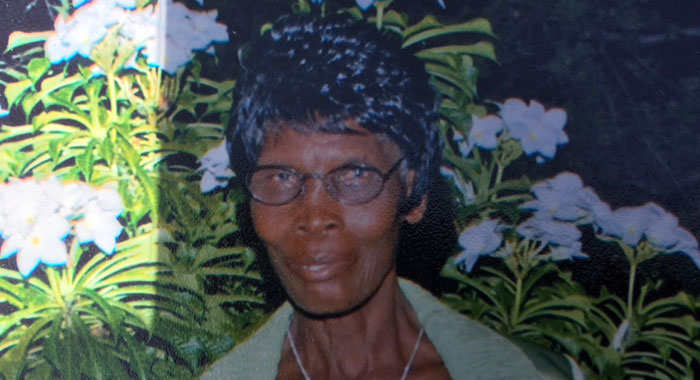 The Byera man who found his 76-year-old mother’s decomposing body days after she was last seen alive says he believes she was raped and killed.

Freddie Peters, 53, the eldest child of Evita Dublin, both of Byera, found his mother’s body during a search of an uninhabited area of the community Wednesday afternoon.

He said he and other relatives and villagers mounted the search after his youngest brother, Cadwell Peters – with whom their mother lived — told him Tuesday night that he had not seen Dublin since Monday.

During an interview at his home on Thursday, Freddie speculated about how his mother might have met her death.

“A post mortem go (will) prove that she was raped and killed,” he told iWitness News, adding that he came to this conclusion, “Because of the way she dressed, the way that we met her; it gives you that impression.”

He said his mother was found wearing only her underwear and her body was wedged between two trumpet trees on the Mt William Estate — about a quarter mile away from her home.

Freddie said that Cadwell had come to his house Tuesday night saying that their mother had not slept at home the previous night and that the last time he had seen her was Monday.

Cadwell, speaking to iWitness News separately on Thursday, said that he thought his mother had gone to Stubbs for therapy and was staying with some relatives there.

Freddie, who, unlike Cadwell, has the contact number for their relatives in Stubbs, telephoned them and learnt that his mother was not there and was not due to visit until later in August.

So, around 7 a.m. Wednesday, the brothers mobilised villagers and mounted a search party and combed through an area where their mother and other farmers take their animals to graze.

That search did not turn up anything, so they returned home and Freddie went to the police to lodge a report.

The police decided to dispatch other officers to help them, but the officers had to come from another station, Freddie told iWitness News.

He said he told the police that he could not wait and was going home to eat then continue the search, along with other villagers.

Freddie told iWitness News that they divided into groups, each of which was assigned to search a different area.

He said that while searching, he began to smell a foul scent.

Freddie told iWitness News that the bag was a nylon sack that contained bush that his mother had apparently harvested for her animals, as was her habit.

He said that after seeing the bag, he saw the cutlass, and his fears deepened that the worst had happened.

“I said, no, they killed my mother. I had to go around some bushes so when I go around and was coming back down in the area, I saw her,” he said.

Freddie said that when he actually saw his mother’s body, he was “at a loss”.

“I was deeply troubled, but I believe that the Lord gives and the Lord takes,” said the grieving man, who is filling in as pastor of his church, Bethel the House of God.

“She was a hard-working woman, even at that age. She is a generous person. I think that from Fancy to Chateaubelair, who might come in contact with her could bear witness of what I am saying about this lady.”

He said that he draws strength from his Christian faith.

“The Bible says that the Lord repented that he ever made man because the heart of man is deceitful and desperately wicked that if you give your heart to certain thinking and thoughts, then that is what you become.

Meanwhile, Cadwell could hardly contain his grief at the loss of his mother.

He said that while he had thought that his mother had gone to Stubbs, his mind kept bothering him on Tuesday, hence his informing his elder brother that he was uncertain about his mother’s whereabouts.

7 replies on “Son believes his elderly mother was raped, killed”