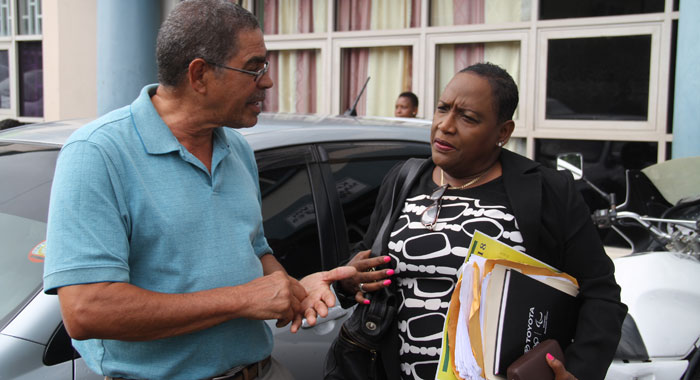 The accused, Douglas De Freitas, left, and his lawyer, Kay Bacchus-Baptiste speak outside the court after her court appearance last Tuesday.

As the prosecution attempts to get underway the trial of radio broadcaster Douglas De Freitas on public alarm charges brought two years ago, they locked horns on Tuesday on the interpretation of a court case on disclosure.

The principle of disclosure, also known as discovery, is a concept in common law that guarantees that in a legal case, the prosecution will provide the defence with all information and evidence pertaining to the charges set out.

In August 2016, De Freitas was arraigned and pleaded not guilty to 12 counts that on Dec. 10, 2015, at Dorsetshire Hill, he made a number of statements that were “likely to cause fear or alarm or to disturb the public peace”, contrary to section 64(1) of the Criminal Code.

In March 2018, the prosecution amended the charges to allege that De Freitas made comments which are “likely to cause fear, alarm, or disturb the public peace”.

Defence counsel, Kay Bacchus-Baptiste, then made an application that Senior Magistrate Rickie Burnett recuse himself from the case.

The magistrate said that the submission that he recuse himself has to be ventilated in court.

He gave prosecutor Karim Nelson until May 1 to file a written submission in response to Bacchus-Baptiste’s application for recusal.

Bacchus-Baptiste also told the court that if the matter goes to trial, she needs to examine the ballot boxes in order to adequately defend her client.

However, the prosecution is vigorously resisting the application for disclosure of the ballot boxes, as have the respondents in two unrelated civil matters: the two election petitions challenging the results of the December 2015 poll.

At the Kingstown Magistrate’s Court on Tuesday, Nelson said that the law on disclosure is very well known.

He said it was recently reiterated in the local jurisdiction in the case of Andre Charles and the Queen, a case in which De Freitas and Bacchus-Baptiste also appeared.

Nelson said the Crown is obligated to disclose material that would assist the defence or would undermine the prosecution.

He said that the prosecution was submitting that in the De Freitas case, ballot boxes are not disclosable.

“Now, Your Honour, if it was possible for us to go back to that place and to that time, then I would agree with my friend.

“Our case doesn’t hinge now at all on the condition of the ballot boxes as they are now. Our case is about their condition between the 9th and the 10th of December 2015, almost three years ago. So that it wouldn’t assist the court and it cannot assist the defence to have ballot boxes disclosed to them.”

Nelson, in a reference to the election petitions, further said that same issue was raised in the High Court and there’s an order from that court.

“And we cannot allow these proceedings to be used as a way to get around that order.”

At this point, the defence lawyer, who is also an opposition senator, said in a rather hushed voice: “Really? So, it’s politics?”

Nelson continued: “But that is by the way. Our point is that there is no assistance that can be rendered to this court by ordering disclosure in relation to the ballot boxes.”

Bacchus-Baptiste, in response, said that perhaps Nelson misunderstands the order made in the High Court.

She said it had nothing to do with sealed or unsealed ballot boxes.

“It had to do with disclosure of ballot papers. The order was made based on the fact that the court held that before the petitions were brought, an order which was made for disclosure was not granted and there was no appeal. That is the reason why the order was refused… It was a legal reason in a civil matter…

“So unfair for a lawyer to make these sorts of comments,” she further said, referring to the prosecutor.

Bacchus-Baptiste said that the ruling in the Charles matter supports her application for disclosure in the De Freitas case.

She said that the only reason that the disclosure that she sought in the Charles case was not granted was because it was on appeal and disclosure was made in the High Court.

“I was not involved then, so the lawyer below did not ask for the particular witness statement that I was asking for.”

Bacchus-Baptiste said that the court ruled that the defence had an opportunity to ask and felt that what was disclosed was sufficient.

“So, it does not change the law on disclosure… It reiterates.”

The lawyer argued that when Nelson said that the prosecution’s case is based on the ballot boxes as they then were, he does not understand his case.

Bacchus-Baptiste said the case in defending the charge is that the ballot boxes were not sealed according law.

“Even the supervisor of elections admits that in her reports and the OAS… They were not sealed according to law. So, when we say unsealed, that is what we meant.

“So, for my learned friend to say bringing them now does not advance the cause, it will undermine their case because it shows clearly that they were not sealed according to law. That’s a fact.”

6 replies on “In NICE Radio boss trial, a battle over ballot boxes, disclosure”