When a controversial group pursues a noble ideal 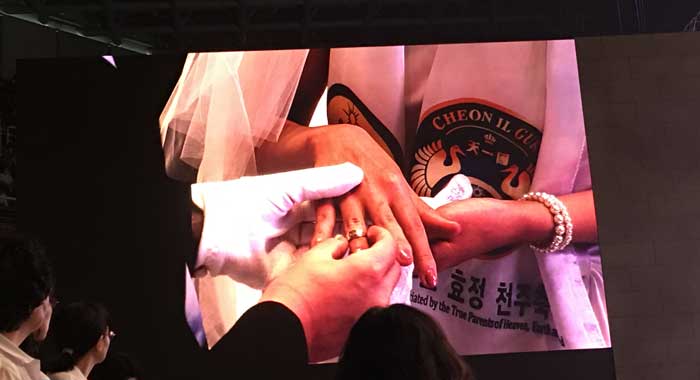 An exchange of rings between one of the thousands of couples that got married in the Unification Church’s ceremony Seoul last week Monday. (iWN photo)

SEOUL, South Korea — A Caribbean Christian cleric has welcomed the efforts of a controversial international religious organisation to bring parliamentarians and religious leaders together in pursuit of world peace, even as a lawmaker from the region has questioned the organisation’s relevance.

Reverend John Carter of the Wesleyan Holiness Church in Barbados and Senator Patrice Dumont, of Haiti, made their observations to iWitness News in separate interviews after the 32nd Universal Peace Federation (UPF)-sponsored international conference, held in South Korea Aug. 26 to 29.

The event was held under the theme “Addressing the Critical Challenges of our Time: The responsibility of Parliamentarian and Religious Leaders.”

“I think the conference is very well put together, I think the whole idea of world peace is a good one,” Carter told iWitness News at the end of the event.

“I don’t think it (attaining world peace) would happen by human intervention but I think the concept is good and also bringing the different leaders in different context together for interaction, that’s a good thing,” he further said after the conference, which heard addresses from Christian, Muslim, Buddhist, Hindu and other religious leaders.

The UPF describes itself as “a global network of individuals and organisations dedicated to building a world of peace in which everyone can live in freedom, harmony, cooperation and prosperity”.

It says, on its website, that there are many critical challenges facing the world, including poverty, climate change, conflict and inequality.

“At the same time, the rise of civil society initiatives and the expansion of ‘track two’ diplomatic efforts involving people-to-people relations, provide new dynamics that can complement and support the work of governments in the search for solutions to our world’s most pressing problems.”

UPF is associated with the Unification Church, a worldwide Christian new religious movement whose members are colloquially called Moonies — a pejorative term.

The Unification Church was officially founded under the name Holy Spirit Association for the Unification of World Christianity (HSA-UWC) in Seoul, South Korea, in 1954, by Sun Myung Moon, a Korean religious leader also known for his business ventures and engagement in social and political causes

The point of departure between the Unification Church and many other Christian denominations is the claim by Moon, who died six years ago, at age 92, that when he was 15 years old, Jesus anointed him to carry out his (Jesus’) unfinished work by becoming parent to all of humanity, meant to bring the Kingdom of Heaven to Earth.

Members of the Unification Church consider Moon and his wife, Hak Ja Han, to be their “True Parents” and, from all indications, worship them.

Another controversial practice within the church is their mass wedding, one of which took place in Seoul on the first day of the conference — in which some 4,000 persons were married.

Critics of the Unification Church have vilified the church as a cult and have questioned its financing and indoctrination.

Some former members of the church have described it as a cult and have detailed what they presented as a well-oiled system of mind control within the organisation.

‘an element of idolatry’

Asked his view on the religious philosophy behind the UPF, Carter told iWitness News:

The Christian cleric was, however, clear on his understanding — a more “mainstream” one — of the teachings of his faith.

“Christianity is a very exclusive kind of religion in that it teaches that Christ is the only way to the father, whereas the other religions have other pathways.

“I noticed in some of the presentations from Dr. Moon and his wife they refer to God and they seem to have their religious philosophy based on the Bible. Now, how they relate to other religions I am not sure about that.”

Regarding the Moon’s claim that they are the second coming of Jesus Christ, Carter said:

“Yeah. That’s off the wall. I think there is an element of idolatry about how they are seen, which I think needs to be spoken to. That is a concern of mine.”

Carter, who was attending his first UPF conference, however, said that he would advise other religious leaders to attend conferences organised by the organisation.

“It is difficult to access certain operations from the outside. I think coming to a conference like this exposes a person to — I am amazed, really, at the level of international human resource that they can pull together for these conferences.

“To me, that is amazing that you can get congressmen and prime ministers and parliamentarians from so many different countries to come together for a conference for this. So it is a good thing, but the aspect of their being elevated at the level of Christ, that is pure idolatry, really.

“If that is what it is, I can’t see it different from that,” Carter said, adding that he would reject outright any such claim.

“As a Christian, my faith is based on the scriptures — the Bible — and the God of Abraham, Isaacs and Jacob and then the son of God, Jesus Christ, who died and resurrected,” he said, adding that even the Koran, Islam’s holy writings, acknowledges Christ’s virgin birth, resurrection, and that he is a messenger of God.

“So any religion or any religious philosophy that does not acknowledge Christ as the only saviour, I can’t support, really,” Carter told iWitness News.

Dumont, who was also attending his first UPF event, said that international conferences are important because there are a lot of problems to be resolved in the world.

Speaking about the UPF conference, he said that it addressed a lot of problems intelligently.

And while Dumont told iWitness News that he is from a Catholic background, but, personally, is an agnostic, he also had issued with the deification of the founders of the Unification Church.

“Personally, I have a problem with what I can name a process of trying to make a divination of the Moon couple — the husband who died six years ago and the wife, Mrs Han, who was at least been a beneficiary of real adoration during the mass wedding.”

Dumont told iWitness News that he thinks there was “a mystic aspect” about the event.

“You can have a religious ceremony as we can find around the world, but when there is adoration of one person, it seems to be a sect. We know that sects are very, very dangerous.”

During the conference, Dumont had raised his concerns about the deification of the founders of the Unification Church.

The moderator attempted to sidestep the concern, saying it is a sensitive matter.

However, in his response to the senator’s concern, Dan Burton, a United States congressman from 1983 to 2013, who is a co-chair of International Parliamentarians for Peace Association, a UPF initiative, said that the founders of the Unification Church stressed their desire to bring the world together regardless of various religious beliefs.

“We’ve had Hindus, Muslims, Christians, people from all over the world have joined together because of Mother Moon and Father Moon to pursue things that we think are very honourable and worthwhile goals. One of the things that I feel so strongly about, … is the international parliamentarians for peace –” he said to applause.

He said that the world is facing the potential of a worldwide holocaust “if we don’t handle things properly.

“And I think Mother Moon and the people associated with her should be commended in trying to bring us together — regardless of your religious belief so that we can unify ourselves and heading toward the goal of heading off a nuclear holocaust,” Burton further said, adding that 50 million people died in World War 2.

“We cannot imagine what would happen if a nuclear holocaust gets out of control and weapons were launched from all over the place, it could annihilate the human race.

“So we are in a very difficult time right now. So whether or not you agree with all the religious beliefs that we have talked about today, I want you to congratulate Father and Mother Moon on bringing religious groups together and people together from all over the world of one goal and that is to solve the problem we face so we have world peace before we reach to disaster,” Burton said in response to Dumont.

What can be UPF’s role in achieving peace?

In his interview with iWitness News, Dumont said there is a two-fold relationship between peace and development, the central theme of the conference.

“Peace can impact on development and development can impact on peace. The problem is what can be the role of UPF in the process of achieve general peace? It is an ideal, but you know that an ideal is, by definition, something that you can’t really touch. And if you touch it for a moment, you have to try to maintain it…”

Dumont said that he does not see a role for the UPF in peace building.

“For example, why not try to organise an international meeting between the two Koreas? Why not invite Israel and Palestine to talk about peace? UPF has to try to resolve the big problems and not the small problems,” Dumont said.

He noted the role of religion, historically, in creating and sustaining major conflicts and said that bringing religious leaders together for dialogue is a good thing.

“But one of the big problem of this type of organisation is that sometimes they stay at the high-level, the organise meetings between leaders but they don’t have an impact on real live. They have to put their feet on the ground and address the real problem of the people,” Dumont told iWitness News.

And while he is agnostic, Dumont does believe that faith plays an important role in human civilisation.