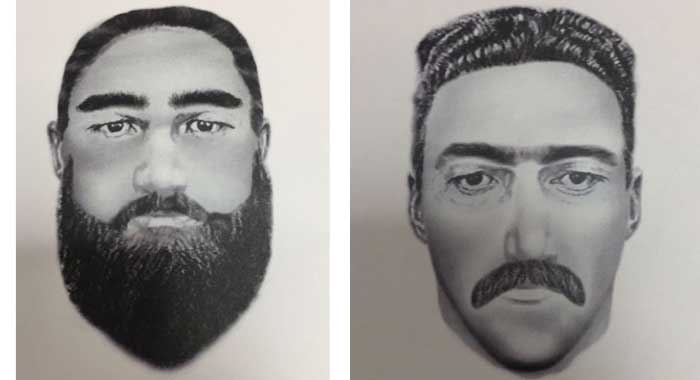 Sketches of the men whom the Peace Corps volunteer said attacked her in Kingstown.

Police in St. Vincent and the Grenadines on Monday released to the media, sketches produced by U.S. professionals of two men who allegedly assaulted a Peace Corps volunteer in Kingstown around 7:30 a.m. on Aug. 20, triggering the relocation of the 23 volunteers to St. Lucia.

Prime Minister Ralph Gonsalves told the media on Monday that a 70-year-old female Peace Corps volunteer alleged that she was assaulted near the Leeward Bus Terminal, four days after arriving in SVG.

Gonsalves, however, said that CCTV footage of the area does not support the woman’s account adding that the video shows that the bag was retrieved right where the woman had left it with all its contents intact.

The prime minister, who is also Minister of National Security, spoke at a press conference along with acting Commissioner of Police, Colin John, who said the nation’s chief detective has been assigned to the case.

“When we received that report, we responded promptly to that report, we visited the person at the hospital and we operated in an effective and efficient manner,” John told the media.

John said that the police high command has assigned acting head of the Criminal Investigations Department, Assistant Superintendent of Police, Hesran Ballantyne, to the case.

“We are seeking the assistance of the public with any information. Anyone who was around the area of the Leeward Bus Terminal on about 7:30 a.m. on the 20th of August 2018 and you think that you can provide us with information, we will welcome this information,” the police chief said.

“We also have the sketches for circulation to the public so that persons who see those persons can come forward and give the police information. We really would like to get to the bottom of this allegation. We take this allegation seriously, as we do in all matters that are reported to the police. So, please feel free to give us information as to any person you see resembling these persons so that we can help to bring this matter to a closure.”

Gonsalves had earlier said that the Peace Corps volunteer had alleged that as she was walking, she was grabbed from behind in a bear hug, her arms were pinned and she was pushed into an alcove next to an empty market table and partition.

“In the process of the alleged assault, she was punched in her stomach, her button-up blouse was ripped open, her breasts were grabbed and squeezed, her head was slammed on a vendor’s table and she was spat upon at the back of the neck. Those are her allegations, in a nutshell.”

A medical report has confirmed that the volunteer had scratches to the face, neck, upper arm and check and bruises to the left upper arm, when she went to the Milton Cato Memorial Hospital, located about 500 metres from the scene of the alleged incident, that same day.

Gonsalves said the volunteer described her alleged assailants as men of Middle Eastern descent both of whom were wearing olive green pants tucked into the top of their black boots, and a dark-coloured long sleeve shirt tucked into the pants.

One of them was said to have had a scarf, a lot of cloth fabric around his neck and a full beard while the other alleged assailant had no beard, Gonsalves said.

The alleged assailants were both of Middle Eastern descent and did not speak with a Caribbean accent.

They are said to have spoken many angry and derogatory words about the American president, the Peace Corps generally and the female Peace Corps volunteers.

Gonsalves said that this information, along with the sketches produced by the US personnel would be very helpful in resolving the case.

“The commissioner speaks from his standpoint of the intelligence, but I am talking now, simple man on the ground observing. But I would tell you that the distinctive nature of these sketches, these artist’s sketches, should be able to jog the memory of one or more persons around that area.”

He said that 7:30 a.m., the Leeward Bus Terminal “is not a place that is sanitised, people go and come all the time.

“At 7:30 in the morning, people start to arrive in town, moving about, sometimes, some have already started to set up their stalls, buses are coming in dropping off people…

“We don’t live on Mars and I think it is important to put that context for persons who are listening to us overseas to know we are very grateful for this help from this sketch artist from the United States authorities, extremely grateful, because we now have the face, we have the image of the alleged assailants so we are moving, hopefully, closer towards a conclusion.”

Gonsalves said that at first, the assumption was that “it’s one of them hustlers try to do something, rob this woman.

“Well, you see, the money is in the bag. The money is there. The incident was a very swift one and it is clear, from the allegation, that the person is not a Caribbean person, is not a local.

“The allegation, I am talking about, that they are Middle Eastern in their appearance. So, we have excluded, clearly, a lot of potential persons whom the police would have been trying to track down because the police would know, from their intelligence [the name of persons] in our country who may want to hustle and rob somebody. You can exclude all of them.

“We are looking for Middle Easterners with a specific distinctive appearance, which should be helpful in locating these assailants.”

And, the police chief said that based on the evidence obtained so far, investigators are unable to put a time frame on the completion of their probe.

“… we are cooperating with the US authorities to solve this matter. So, I cannot give a specific date as to when the investigation would conclude,” he said.

Asked what is likely to happen if, at the end of the investigation, the volunteer’s report is found to have been fabricated, John said:

“Well, I would not want to go into speculation. As I said before, we are acting on whatever information we have. We cross the bridges as we meet them.”

He told the media that he does not think that the Middle Eastern community or persons with such an appearance in SVG should be apprehensive of any untoward acts toward them as a consequence of the Peace Corps volunteer’s claim.

“Based on our intelligence, we do not envisage that that is a likely repercussion of circulating these photos.”

Meanwhile, Gonsalves noted that the people of Middle Eastern descent have been in St. Vincent and the Grenadines from maybe the 1940s and have integrated themselves into the country.

“I don’t know of any problem which we have with people of Middle Eastern descent in this country.

“Our observation and our knowledge is that they are overwhelmingly hardworking people, like the rest of St. Vincent and the Grenadines…” the prime minister said.